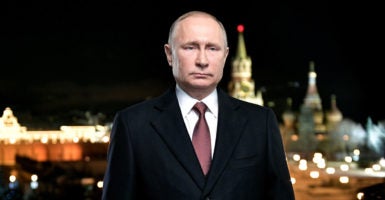 For the past couple of weeks, Russia has been sowing disinformation about the coronavirus.

Various Russian news sources have claimed that the U.S. started the COVID-19 pandemic, the U.S. deployed the virus as a “biological weapon,” or that the virus is a complete hoax created by the United States. These statements are false and clearly disinformation.

The U.S. State Department and the European Union’s diplomatic service have declared them as such.

The way Russia is spreading the disinformation is itself devious. Instead of creating the disinformation, Russia has hooked onto various theories authored by China or Iran, for example. This tactic allows Russia to shift the blame to other nations and essentially “play dumb.”

Several Western nations have called out the Russians over this, but the Kremlin, including Russian President Vladimir Putin, claims the allegations are “unfounded.” But then again, Russia rarely owns up to its offenses.

In the 1980s, the KGB, the USSR’s state security agency, spread disinformation about AIDS. It claimed the U.S. invented AIDS and was using the disease as a biological weapon.

In 2016, Russia spread disinformation about the U.S. presidential election. (The U.S. intelligence community has proven this.) Russia employed a far-reaching social media propaganda campaign that contributed to vast divisions in American society.

And now, it is spreading lies about the start of the coronavirus.

Yet, on March 31, Putin signed a law that prohibited the spread of false information about the coronavirus with punishments of one to five years in jail and potential fines of up to 2 million rubles (about $32,000).

So, the Russian government is spreading lies about the virus, but apparently it has no problem punishing its citizens for doing the same thing.

The U.S. should be vigilant about Russia’s disinformation, especially in the midst of the COVID-19 pandemic. Russian propaganda can be easily skewed to appear factual, but U.S. lawmakers, leaders, and civil society should keep their eyes peeled and look beneath the surface. Russia is out to undermine the United States, and this should not be taken lightly.