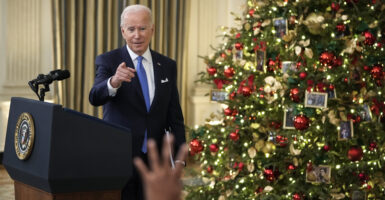 “Unfortunately, we still have tens of millions of people who are eligible for the booster shot who have not yet gotten it,” says President Joe Biden, pictured Tuesday taking a question after speaking about COVID-19 in the State Dining Room of the White House. (Photo: Drew Angerer/Getty Images)

President Joe Biden cautioned Tuesday against panic over the omicron variant of COVID-19, but said Americans have an obligation to get vaccinated and called for parents to make sure their children get shots.

“Some Americans are wondering if you can safely celebrate the holidays with your family and friends,” Biden said during remarks in the State Dining Room of the White House. “The answer is yes, you can—if you and those you celebrate with are vaccinated, particularly if you’ve gotten your booster shot.”

The president also announced a large expansion of COVID-19 testing, including 500 million at-home tests for the coronavirus that the government could send to Americans at no charge starting next year.

“The federal government will purchase one-half billion–that’s not a million, [but] billion with a B–additional at-home rapid tests with delivery starting in January,” Biden said. “We’ll give these tests to Americans for free. We’ll have websites where you can get them delivered to your home.”

“Should we just send one to every American?” Psaki asked the reporter, who responded, “Maybe.”

With about 331 million Americans, 500 million tests would be more than enough for one test for each.

Psaki’s briefing Tuesday wrapped up moments before Biden’s speech, and she fielded questions about Biden’s coming into contact with a White House staffer who tested positive for COVID-19.

Psaki said Biden tested negative Tuesday and would be tested again Wednesday. But he has not had any symptoms, she said.

During his speech, the president coughed and cleared his throat multiple times.

“It’s a lot better than it was,” Biden said at one point, referring to March 2020 when the country largely shut down to try to stop the spread of COVID-19.

The number of COVID-19 deaths in the U.S. under the Biden administration has surpassed such deaths under the Trump administration. About 432,400 of the 807,400 U.S. deaths attributed to the coronavirus occurred in 2021, or more than double the 375,000 in 2020, according to the Centers for Disease Control and Prevention.

“I’ll be deploying hundreds more vaccinators and more sites to help get the booster shots in people’s arms,” Biden said.

The White House, in a press release, specified federal vaccinators “across 12 states, tribes and territories” and said that 73% of adult Americans are fully vaccinated against COVID-19.

“Unfortunately, we still have tens of millions of people who are eligible for the booster shot who have not yet gotten it,” Biden said.

“They’ve gotten the first two shots. They have not gotten the booster,” he said, noting that about 60 million Americans have had a booster. “I got my booster shot as soon as they were available. Just the other day, former President Trump announced he had gotten his booster shot. It may be one of the few things he and I agree on.”

These companies and personalities are making money by peddling lies and allowing misinformation that can kill their own customers and their own supporters. It’s wrong. It’s immoral. I call on the purveyors of these lies and misinformation to stop it. Stop it now.

Biden also defended the administration’s vaccine mandate for employers with more than 100 workers. The Heritage Foundation, parent organization of The Daily Signal, is among dozens of employers that have sued to stop that mandate from going forward.

“I know vaccination requirements are not popular for many. They are not even popular for those who are anxious to get them,” Biden said. “My administration is putting them in place not to control your life but to save your life and the lives of others.”

The president’s vaccine mandate for private employers is likely headed to the Supreme Court because federal appeals courts have issued opposing rulings.

As cases rise, so will hospitalizations, Biden said.

“Hospitals are going to get extremely stressed again, both in terms of equipment as well as personnel to care for those who get sick,” he warned.

The president said he has ordered the Defense Department to assist hospitals during January and February.

It’s 1,000 military doctors, nurses, and medics. We’ve already started moving medical teams. They’ve already landed in Wisconsin and Indiana this week. This is on top of 350 medical personnel that are now on the ground, having deployed since we learned about omicron.

The White House announced that six emergency response teams with more than 100 clinical personnel and paramedics are deploying to Michigan, Indiana, Wisconsin, Arizona, New Hampshire, and Vermont. The administration already had deployed 300 workers after the emergence of the omicron variant.

The Federal Emergency Management Administration will deploy hundreds of ambulances and emergency medical teams. So far this week, FEMA has sent 30 paramedics to New Hampshire, 30 to Vermont, and 20 to Arizona, with 30 ambulances headed to New York and eight to Maine.

This report was modified within 36 hours to include CDC statistics on U.S. deaths attributed to COVID-19.