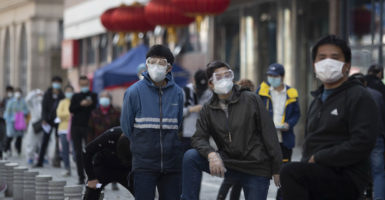 Now, the Chinese government, trying to deflect blame, has added insult to injury by falsely and absurdly accusing the United States of being the origin of the pandemic. It is straight out of the old Soviet playbook on disinformation campaigns and demands a vigorous response from the U.S. State Department.

On Friday, Lijian Zhao, spokesman for the Chinese Foreign Ministry, stated in a tweet that the outbreak in Wuhan followed the visit of 300 athletes from the U.S. Army. He brazenly called for the United States to reveal the identity of patient zero and hospital records. China also has accused the United States of causing unnecessary panic in its response.

Secretary of State Mike Pompeo lost no time responding—both in person to China’s ambassador to the United States, who was summoned to the State Department, and in a phone call to a Communist Party official in Beijing.

“Secretary Pompeo conveyed strong U.S. objections to PRC efforts to shift blame for COVID-19 to the United States,” State Department spokesperson Morgan Ortagus said in a Monday statement. “The secretary stressed that this is not the time to spread disinformation and outlandish rumors, but rather a time for all nations to come together to fight this common threat.”

The Chinese seeds of disinformation may fall on fertile ground in Africa, among other places. For decades, China has invested in Africa and pushed its communist economic model over free market capitalism as the way to lift nations out of poverty.

China’s ambassador to South Africa, Lin Songtian, is a key figure in this effort, and has spent much effort assuring the South Africans that the United States, not China, is the origin of the virus.

More evidence suggests that the virus was not originated at the seafood market in Wuhan at all, not to mention the so called “made in China”. https://t.co/8cRxkSZB3z

Pushing back on Chinese disinformation proportionately and without delay is necessary even as the U.S. government focuses on the most important problem—how to curtail the spread of COVID-19 and treat its victims.

The Chinese are not letting the crisis go to waste, fostering anti-Americanism out of the human disaster it has created. The U.S. must set the record straight.