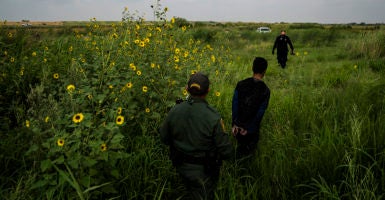 Customs and Border Protection agents apprehend a 15-year-old boy who illegally crossed into the United States from Mexico May 29, 2019, in McAllen, Texas. (Photo: Jabin Botsford/The Washington Post via Getty Images)

While enforcement actions along the U.S. southern border rose for the first time in nine months, the increase is much smaller than the historical average, a consequence that is being attributed to the administration’s immigration policies.

Although this marks the end of eight consecutive months of enforcement declines along the U.S. southern border, Morgan noted that February’s numbers are far lower than the historical average.

“It’s because of this president that we now have more tools than we’ve ever had before to do our job. It’s just a fact,” Morgan said Wednesday.

“We’re expanding these initiatives, and we’re getting more efficient at doing our job,” Morgan continued. “That has been the game-changer, and we’ve been able to do that because the president and this administration have given us the tools and ability to be able to do that.”

“We’re in a very different place than we were last year,” he said.

2019 was certainly challenging for the agency. CBP conducted more than 144,000 enforcement actions in May, the peak of the U.S. immigration crisis. Since that time, monthly enforcement actions—which encompass apprehensions and inadmissibles—declined every month, bottoming out at 36,679 in January.

In February 2019, CBP reported a total of 76,545 enforcement actions—far higher than the numbers for February of this year.

Morgan credited the steep decline on a slate of initiatives undertaken by the Trump administration, including Migrant Protection Protocols and the asylum cooperation agreements reached with the Northern Triangle governments.

Morgan also added that his agency is processing illegal aliens at a faster rate than they are coming in.

“In the last five months, we are removing and returning more illegal migrants than those we are apprehending. We are more effective and efficient at doing it,” the CBP chief said, adding that they are applying a “consequence” to 95% of illegal aliens who are apprehended by the agency.

“This is a true game-changer,” he said.