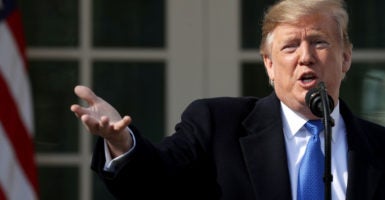 President Donald Trump speaks on border security during a Rose Garden event at the White House on Feb. 15, 2019, before declaring a national emergency to free up federal funding to build a wall along the southern border. (Photo: Chip Somodevilla/Getty Images)

The fiscal 2021 spending blueprint is clear that national security and immigration are express constitutional functions of the federal government.

“Border security is national security” is the opening line of the Department of Homeland Security’s budget-in-brief funding priorities.

That’s in addition to the $18 billion provided for wall systems from fiscal years 2017 through 2020 (including the Defense Department’s military construction funds and the Treasury Department’s criminal asset-forfeiture dollars). All of this will provide 1,000 miles of wall, some replacement sections and some not.

The $2 billion is less than the $5 billion sought by the president last year, because the administration is assessing where else new wall is needed.

Last year, during the crisis on the southwest border, too many Border Patrol agents and field operations officers were pulled off their respective lines to perform those functions. For that reason, the budget seeks $20 million to hire 300 coordinators so the agents can remain on the line.

To supplement Border Patrol technology, the budget requests $28 million to construct 30 more surveillance towers. With this funding, Customs and Border Protection intends to deploy a total of 200 such autonomous towers, which provide computerized surveillance in areas that are difficult for agents to patrol.

Beyond the border, the administration also strongly supports interior immigration enforcement with a $1.8 billion increase for Immigration and Customs Enforcement, including:

The president’s budget proposes $883 million for the Justice Department’s Executive Office for Immigration Review, a 31% increase over fiscal 2020.

To tackle the unreasonably large backlog of cases, the budget provides funding for an additional 100 immigration judge teams and for the office’s modernization of information technology.

The Trump administration has become fed up with the variety of tactics used by liberal states and localities to thwart immigration enforcement. These include releasing criminal aliens onto the streets after refusing to honor an ICE detainer; prohibiting ICE from using an international airport for alien removals; and refusing to share information from motor vehicle agencies with immigration enforcement agencies.

(1) clarify that a federal, state, or local law, entity, or official may not prohibit or restrict compliance with a civil immigration detainer.

(2) explicitly authorize the Department of Homeland Security and the Justice Department to condition grants and cooperative agreements on the recipient’s cooperation with federal immigration enforcement activities and requests.

Because we are in a presidential election year, the debate over funding efforts to curb illegal immigration will be hyperpolitical in Congress.

We’re unlikely to see a final Department of Homeland Security appropriations bill before the November election, however. Congress is in the practice of passing continuing resolutions to get past any political events, and the election is the biggest political event of them all.