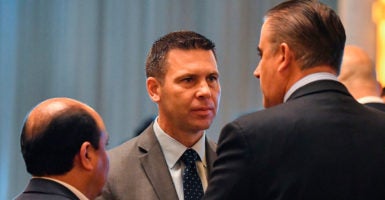 The Trump administration signed an asylum agreement with the Honduran government Wednesday, marking the latest in a string of asylum deals with Latin American countries aimed at controlling the immigration crisis.

The Department of Homeland Security announced it reached a deal with Honduran President Juan Orlando Hernandez, allowing the U.S. to send some asylum-seekers from “third” countries back to his country. Migrants who cross Honduras, but did not first seek protected status there, would be sent back if they reach the U.S. southern border.

“Once the agreement enters into force, it will further enhance asylum and protection capacity in Honduras,” the Department of Homeland Security said in its statement. “Using best practices developed by the United States and the international community, the two countries will collaborate to increase protection options for vulnerable populations. The United States and Honduras will work together to ensure that these vulnerable populations are not victimized by smugglers.”

The asylum agreement with Honduras, which took place Wednesday at the U.N. General Assembly in New York City, was signed by acting Homeland Security Kevin McAleenan. The DHS chief has already signed similar deals with El Salvador and Guatemala in order to stem the flow of migrants reaching the U.S. southern border.

During a press conference in Washington, D.C., on Friday, McAleenan sat alongside El Salvador’s minister of foreign affairs to sign an “asylum cooperation agreement,” allowing the Trump administration to turn away asylum-seekers who reach the southern border and send them to El Salvador for refuge.

McAleenan signed a “safe third country” deal with Guatemala’s outgoing administration in July, which is largely similar to the deals with Honduras and El Salvador.

In return, the Trump administration pledged to bolster each country’s asylum capacity.

However, Guatemala has yet to implement its own deal, and it’s not clear when El Salvador or Honduras plan to begin accepting asylum-seekers either.

The Trump administration is reaping the benefits of an agreement it reached with Mexico in June. After President Donald Trump threatened to slap all its imports with a 5% tariff, the Mexican government pledged to deploy 6,000 members of its newly formed National Guard troops across its own border.

Their government is also cooperating on the recently implemented Remain in Mexico policy, also known as Migrant Protection Protocols, which keeps asylum-seekers in Mexico as they wait for their claims to be adjudicated in the U.S. immigration court system.

Border apprehensions have fallen in the wake of the international deals.

Customs and Border Protection announced that the month of August saw a huge decrease in the number of migrants reaching the U.S.-Mexico border—a 22% drop since July. The administration encountered just over 64,000 migrants in August, a decline from the 82,000 encounters in July, and far drop from the over 144,255 encounters seen in May.