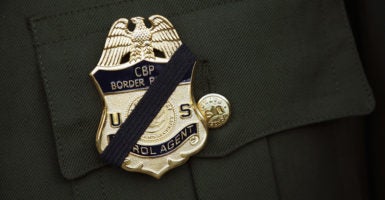 The Trump administration is deploying an elite unit of the Border Patrol, including 100 Customs and Border Protection officers, to assist Immigration and Customs Enforcement apprehend illegal aliens in sanctuary cities.

Members of the Border Patrol Tactical Unit (BORTAC) will be helping ICE officers arrest illegal aliens living at large in sanctuary cities, a spokesman for Customs and Border Protection, Lawrence Payne, confirmed to The Daily Caller News Foundation on Saturday.

BORTAC isn’t the only special unit being deployed across the country. In total, 50 Border Patrol agents and 50 Office of Field Operations officers are part of Customs and Border Protection’s deployment. These 100 individuals come from a slate of different areas within CBP, not just BORTAC.

These Border Patrol teams will operate in sanctuary cities from February to May. They will be tasked with backing up ICE agents during deportation operations and routine immigration arrests.

The Department of Homeland argued that, with so many ICE agents reassigned to the U.S.-Mexico border amid the immigration crisis, their operations were stretched thin in the interior of the country.

“With 5,300 [Enforcement and Removal Operations] law enforcement officers—some of whom were detailed to the border—ICE does not have sufficient resources to effectively manage the sustained increase in non-detained cases which is exacerbated by the rise of sanctuary jurisdictions. The CBP agents and officers who are being detailed to help ICE come from a number of different sectors and job positions,” read a DHS statement provided to The Daily Caller News Foundation.

“While some of them are trained in tactical operations, that is one of the many areas of training. These officers have also been trained in routine immigration enforcement actions which is what they have been asked to do,” the statement continued.

The decision to deploy these special units comes as the Trump administration escalates its fight with states and localities that refuse to cooperate with federal immigration authorities.

The White House has in the past refused federal funds to such sanctuary cities, and President Donald Trump used his latest State of the Union address to specifically call out sanctuary cities, inviting as his guest the brother of a man slain by an illegal alien who was wanted by ICE.

Matthew Albence, the acting director of ICE, has repeatedly spoken on the dangerous consequences when local governments refuse to work with his agency.

“As we have noted for years, in jurisdictions where we are not allowed to assume custody of aliens from jails, our officers are forced to make at large arrests of criminal aliens who have been released into communities,” Albence said in a statement.

He added: “When sanctuary cities release these criminals back to the street, it increases the occurrence of preventable crimes, and more importantly, preventable victims.”

Under most sanctuary policies, local law enforcement is forbidden from honoring ICE detainers. When an illegal alien is placed under their custody for an unrelated crime, ICE will typically send the local jurisdiction an immigration detainer, requesting that the individual be detained long enough for an ICE agent to arrive and make an apprehension.

Such an arrest—done in a controlled environment where the alien is already under custody—makes it more safe for all parties involved. However, sanctuary jurisdictions simply ignore these detainers and, if the individual is able to make bail, he is released back into the community.

Arresting illegal aliens at large in a community can be much more dangerous—especially when convicted criminals are involved.

Burdened with an increasing number of jurisdictions that are refusing to help it take criminal illegal aliens of the streets, ICE leadership has asked for additional help from CBP, the parent agency of Border Patrol. These specially trained officers are expected to be deployed in a number of liberal enclaves, such as Chicago, New York City, Atlanta, San Francisco, Houston, Los Angeles, Boston, New Orleans, Newark, and New Orleans.

The Department of Homeland Security said these officers are fully equipped to help ICE perform its duties.

“All CBP officers and agents are FLETC-trained, just like ICE, and are more than capable of helping ICE fulfill their mission,” DHS said, referring to Federal Law Enforcement Training Centers.