‘Ripped Our Hearts Out’: SOTU Guest Whose Brother Was Murdered Reacts to Pelosi Ripping Up Speech 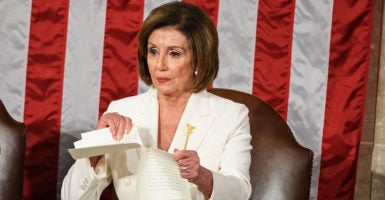 House Speaker Nancy Pelosi rips a copy of President Donald Trump's speech after he delivered the State of the Union address at the U.S. Capitol in Washington, D.C., Feb. 4, 2020. (Photo: Mandel Ngan/AFP/Getty Images)

A guest at the State of the Union address whose brother was killed by an illegal alien said it was heartbreaking to watch House Speaker Nancy Pelosi rip up President Donald Trump’s speech.

Appearing on “Fox and Friends” Wednesday morning, Jody Jones, whose brother was shot and killed by an illegal alien at a California gas station in 2018, recounted how he felt when Pelosi chose to rip up Trump’s speech at the end of the address, calling it “probably the most disrespectful thing I have ever seen in my life.”

“Felt like she ripped our hearts out. All the guests. We couldn’t believe it,” Jones said.

“I don’t care how you feel about somebody. That was probably the most disrespectful thing I have ever seen in my life. Because, when she did that, it just tore us up. We couldn’t believe it,” he continued.

It wasn’t lost on the Fox News hosts or Jones that his brother’s name, Rocky Jones, was on that paper.

Trump invited Jody Jones to be one of his special guests at Tuesday night’s State of the Union address in Congress. Jones’ brother, Rocky, was shot and killed at a California gas station in 2018 by an illegal alien, and his presence Tuesday night was used to highlight the deadly consequences of sanctuary city policies.

The illegal alien who was held responsible for killing Rocky had been arrested for a DUI by local California authorities just days before the shooting. Immigration and Customs Enforcement had placed an immigration detainer on the individual, but because of sanctuary policy laws in the state, the detainer was ignored.

Jones asked that the legislation responsible for his brother’s death, SB 54, be abolished, and called on Pelosi to be more respectful.

“First of all, let’s do away with the SB 54. I don’t care how you feel about somebody. Think of other people and the others involved, please. Because what you did was very disrespectful, and it really ripped our hearts out,” Jones said.

During his address, Trump called on lawmakers to support legislation introduced by Republican North Carolina Sen. Thom Tillis, the Justice for Victims of Sanctuary Cities Act, that would allow people like Jones to sue sanctuary cities if a loved one is killed or hurt by such “deadly” policies.

As for Jones, he said this tragedy has affected his family tremendously, but it has not torn them apart.

“We are a pretty tight-knit family,” he said. “It’s really actually made us closer, and with the president inviting us, what an honor that was just to honor our brother and he sure did that.”