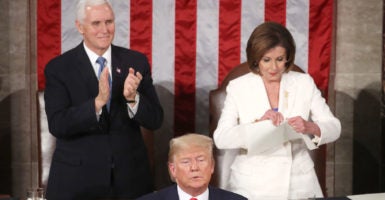 House Speaker Nancy Pelosi says she ripped the pages of the president's speech in two "because it was the courteous thing to do, considering the alternatives." (Photo: Mark Wilson/Getty Images)

Immediately after President Donald Trump finished his State of the Union address, House Speaker Nancy Pelosi, standing behind him, tore his speech in half while the eyes of the nation watched.

In four separate motions Tuesday night as lawmakers applauded the president, Pelosi tore the pages of her copy of the speech in two.

“Speaker Pelosi just ripped up: One of our last surviving Tuskegee Airmen. The survival of a child born at 21 weeks. The mourning families of Rocky Jones and Kayla Mueller. A service member’s reunion with his family. That’s her legacy,” the White House tweeted.

Pelosi’s demonstration followed Trump’s ignoring her outstretched hand after giving her a copy of his speech as he arrived at the podium in the House chamber about an hour and a half earlier. The speaker, who led House Democrats in impeaching the president, grimaced at this.

Just minutes after the president concluded his speech, #Pelosi, #NancyPelosi, #SpeakerPelosi, #Nancy, and #Classless became top trending hashtags along with #SOTU and #SOTU2020.

Americans across the country took to Twitter to express their opinions.

“How petty of Pelosi,” House Minority Leader Kevin McCarthy, R-Calif., tweeted. “Ripping up a piece of paper doesn’t change the facts that were written on it—Americans are winning, in spite of the do-nothing Democrats.”

“Tonight President Trump highlighted his record of #Results for our country in his #SOTU. He invited amazing guests with extraordinary personal stories that capture the American Dream,” Rep. Elise Stefanik, R-N.Y., tweeted. “Meanwhile Petty Pelosi tears up the speech. How classless.”

In a statement, Pelosi said: “The manifesto of mistruths presented in page after page of the address tonight should be a call to action for everyone who expects truth from the president and policies worthy of his office and the American people.

“The American people expect and deserve a president to have integrity and respect for the aspirations for their children,” the California Democrat added.

Fox News Channel reported that Pelosi said she ripped the pages of the speech in two “because it was the courteous thing to do, considering the alternatives.”