Guests at State of the Union Showcase Americans Behind Policy Debates 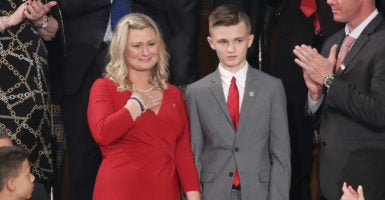 Kelli Hake, the widow of a U.S. soldier killed in Iraq in 2008, attends the State of the Union address Tuesday night with her son, Gage. (Photo: Drew Angerer/Getty Images)

Recent presidents have used the annual State of the Union address to throw a spotlight on Americans who exemplify the nation’s ideals and help illustrate policy priorities.

President Donald Trump’s guests Tuesday night for his third State of the Union address included some of those on the front lines of the border security fight and the school choice movement.

Lawmakers from the opposition party, in this case Democrats, also invite guests who symbolize issues important to them.

Ellie Schneider. Born at 21 weeks and six days, Ellie is one of the most premature babies known to survive in the United States.

Though not expected to live long, “Ellie kept beating the odds, exceeding milestones, and fighting for life,” the White House said in describing her story.

Thanks to excellent medical care, she is now a healthy 2-year-old who attended the State of the Union with her mother, Robin Schneider.

After introducing Ellie, the president announced an increase in funding for neonatal research and touted legislation to ban late-term abortions.

Kelli and Gage Hake. The U.S. drone strike that killed Iran’s chief terrorist, Qassim Suleimani, was a victory for all Americans. But for Kelli Hake and her son Gage, of Stillwater, Oklahoma, the successful mission was personal.

Hake’s husband, Army Staff Sgt. Christopher Hake, died on Easter Sunday 2008 when a roadside bomb exploded under his vehicle during his second tour of duty in Iraq. Gage, now 13, was 1 at the time.

U.S. officials said Suleimani, a general who headed Iran’s Quds Force, supplied the bomb as part of a campaign to kill and maim American troops.

Since her husband’s death, Kelli Hake had been vocal about Suleimani’s involvement in the deaths and woundings of U.S. troops.

“It’s not that he physically killed Chris himself,” she told The New York Times, “but he was the one who put those motions into action.”

Jody Jones. The resident of Farmersville, California, lost his brother, Rocky, 51, when a twice-deported illegal immigrant killed him during a shooting spree on Dec. 17, 2018.

The illegal immigrant had been arrested six times before in connection with other violent crimes, but had been released earlier in the  month under California’s “sanctuary state” policy.

In a 24-hour rampage that began days after his release, he robbed a gas station, injuring several people, then led police on a high-speed chase before murdering Rocky Jones.

He is survived by a daughter as well as Jody and three other brothers.

Stephanie and Janiyah Davis. Philadelphia resident Stephanie Davis has been searching for a school that meets the needs of her daughter, Janiyah.

Because Pennsylvania does not strongly support school choice for the state’s parents and children, according to the White House, Janiyah’s love for art and math has been confined to low-performing public schools.

Davis works hard as a single mother in hopes of providing her daughter with a better education, but Janiyah remained among 50,000 students on a waiting list for a tax credit scholarship.

In one of several surprises, Trump announced during his speech that the fourth-grader would get a scholarship to enroll in the school of her choice.

For profiles of all of the president’s special guests, go here.

Courtney Wild. One of alleged sexual predator Jeffrey Epstein’s accusers before his apparent suicide in jail in August, Wild accompanied Rep. Jackie Speier, D-Calif., to the State of the Union address. Last summer, Wild testified that Epstein sexually abused her when she was 14.

Wild’s name is on the Courtney Wild Crime Victims’ Rights Reform Act of 2019, a bipartisan bill cosponsored by Speier. The bill would “require prosecutors to notify sexual assault victims of precharging developments such as plea bargains and other agreements,” The New York Times reported.

Epstein’s accusers were not notified that he was able to plead guilty to a lesser set of crimes in Florida in 2008, resulting in 13 months in a county jail with extensive work release provisions.

Khashoggi is believed to have been murdered while visiting the Saudi consulate in Istanbul in 2018, and Cengiz has sought justice ever since.

Though Saudi Arabia sentenced five men to death and three others to prison in connection with the murder, Cengiz says she believes those responsible for giving the order are too high up in the Saudi government to face repercussions.

Andrea Chamblee. Her husband, reporter and editor John McNamara, was among five people killed by a gunman at the The Capital Gazette newspaper in Annapolis, Maryland.

Chamblee was the guest of Sen. Chris Van Hollen, D-Md., to symbolize their support for more restrictions on gun ownership.