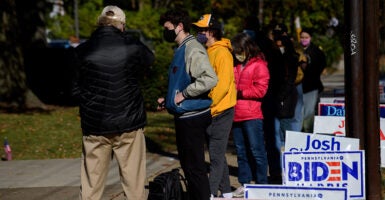 Pennsylvania’s Republican Party has raised concerns over voting practices  in the battleground state.

“New picture from the field: an official ballot box being taken away by an unidentified civilian. What’s going on here?” Philly GOP tweeted Tuesday.

On Saturday, Shapiro tweeted, “If all the votes are added up in PA, Trump is going to lose. That’s why he’s working overtime to subtract as many votes as possible from this process.”

And he added, “For the record, he’s [Trump] 0-6 against us in court. We’ve protected voting rights. Now, ignore the noise—vote!”

On Tuesday, White House strategic communications director Alyssa Farah told “Fox Across America” with Jimmy Failla, “We’ve been really concerned with some of those early comments from the attorney general.”

The president does have a legal team in Pennsylvania to ensure that election results are accurate and every vote is counted, Farah said. But she added that “it’s always concerning when those who are tasked with objectively carrying, executing an election really seem to be putting their thumb on the scale one direction or the other.”

President Donald Trump visited the swing state 13 times over the course of the campaign and former Vice President Joe Biden made 16 trips to the state. In 2016, Trump won Pennsylvania by only 0.7 percent, or 44,000 votes. The state has 20 electoral votes.

“There’s a lot of paths to victory for the president … ” Farah said. “So we hope we win Pennsylvania. It would be an honor, but there’s other routes as well.”

Will Chamberlain, editor-in-chief of Human Events, shared a video of workers preventing a poll watcher from entering a polling place in Philadelphia because his certificate was “not for this location.”

A photo of the man’s “Philadelphia County Board of Elections Watchers Certificate” shows the paper “authorizes the individual to watch in any ward/division in Philadelphia.”

“We need to slow this down and screw it up,” Gunasekara reported the poll workers saying.

Biden/Harris signs were also seen outside a Philadelphia polling location despite such campaign material being prohibited at voting sites, according to the Philly GOP Twitter account.

State laws do not allow officials to begin counting mail-in ballots in Pennsylvania until Election Day, which could add to delays in declaring a winner.

Philadelphia’s mayor, James Kenney, wrote in a letter Monday that “getting a tally of mail-in ballots will easily take several days.”

Last month, the Pennsylvania Supreme Court ruled mail-in ballots postmarked by Election Day can be received and counted up to three days after the election. In a 4-4 decision, the U.S. Supreme Court left the state Supreme Court’s ruling in effect.

Biden, who is originally from Scranton, Pennsylvania, visited his hometown on Election Day and promised a crowd of about 200 supporters he would restore “decency to the White House.”

The president also made Pennsylvania one of his final campaign stops. During a rally Saturday, Trump said, “A great red wave is forming.” He added, “As sure as we’re here together, that wave is forming and they see it, they see it on all sides, and there’s not a thing they can do about it.”