In 2006, These Democrats Still in Office Voted to Build a Wall 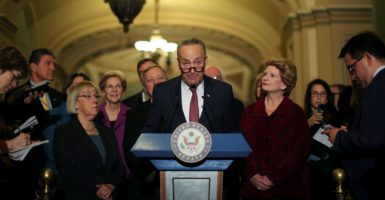 Then-Sens. Barack Obama, Joe Biden, and Hillary Clinton were among the 26 Democrats who approved the bill. Supporters also included Sen. Chuck Schumer, who is set to take over leadership of the Senate for Democrats in 2016.(Photo: Carlos Barria/Reuters/Newscom)

Editor’s note: During an interview on NBC’s “Meet the Press” Sunday, Sen. Chuck Schumer declared, “We’re not going to help [Trump] build his wall.” Schumer was one of the Democrats to support construction of a wall in 2006.

Democrats are already grumbling about Donald Trump’s proposed border wall, though Barack Obama and other leaders in their party voted not so long ago for George W. Bush’s proposal to build a major wall on the border with Mexico.

Bush signed the proposal into law in 2006, after it was passed by huge bipartisan majorities in the House and Senate.

The law ordered the Department of Homeland Security to construct about 700 miles of fencing along the southern border, and authorized the addition of lights and cameras and sensors to enhance security. The law explicitly required the wall to be constructed of “at least two layers of reinforced fencing.”

Then-Sens. Barack Obama, Joe Biden, and Hillary Clinton were among the 26 Democrats who approved the bill. Supporters also included Sen. Chuck Schumer, who is set to take over leadership of the Senate for Democrats in 2016.

But nearly a decade later, DHS has built only 35.6 miles of the double-layered fencing. That’s because a Democrat-controlled Congress later amended the law to allow DHS officials to build whatever sort of barrier they deemed appropriate.