This Student Was Ordered to Remove a Bible Verse From Her Graduation Speech. Here’s What Happened. 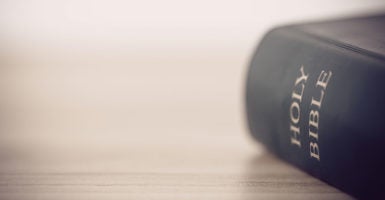 "God always has a purpose," a student wanted to say at graduation. "I find comfort in Jesus' words, and I pass them on to you. John 16:33. 'These things I have spoken to you, that in Me you may have peace. In the world you have tribulation, but take comfort, I have overcome the world.'" (Photo: SunnyGraph/Getty Images)

Last week, Colorado Mesa University gave the Class of 2018 a lot more than their diplomas to celebrate. The Grand Junction campus finally decided to let Karissa Erickson quote the Bible in her speech. But not without a fight.

The controversy started a few weeks ago when Erickson, a nursing student, turned in her remarks for graduation. In them, she talks about persevering through adversity. “God always has a purpose,” she wanted to say. “I find comfort in Jesus’ words, and I pass them on to you. John 16:33. ‘These things I have spoken to you, that in Me you may have peace. In the world you have tribulation, but take comfort, I have overcome the world.'”

CMU President Tim Foster apparently didn’t find comfort in Jesus’ words and ordered them scrubbed from Erickson’s address, along with any mention of God. He and his administrative team warned her of “repercussions” if she kept the text in. ” … Some people don’t appreciate those references,” they insisted.

Unfortunately for Foster, that’s not a legitimate reason for denying anyone—let alone a student—their constitutional rights. Erickson contacted our friends at the Alliance Defending Freedom who wasted no time schooling CMU on the particulars of the First Amendment.

“According to CMU officials,” ADF attorneys wrote, “the University is censoring Miss Erickson’s references to Jesus and the Bible because they might offend another student or attendee. But this reasoning flatly ignores decades of First Amendment jurisprudence. For the First Amendment exists precisely to protect controversial speech.”

Almost immediately, the university reversed course. College spokeswoman Dana Nunn said the faculty were “trying to do the right thing, but made a mistake.”

“It was a well-intentioned misunderstanding of what was appropriate,” she went on. “I think it’s fair to say that a lot of people have their own interpretations of the separation of church and state, and the faculty member that initially asked for the change was just trying to do the right thing, she was just not correct legally … It was a well-intentioned and honest error but an error nonetheless. As soon as the error came to our attention, we did our best to correct it.”

ADF’s Travis Barham was impressed by how quickly the university changed course. “When they were confronted with what the law required, they quickly backtracked and allowed the student to speak freely.”

Of course, it’s an important lesson to all of us that just because we have religious freedom doesn’t mean we won’t have to fight to exercise it. We tip our (graduation) cap to the young people like Erickson for standing up for what’s right—and giving their generation the courage to do the same.