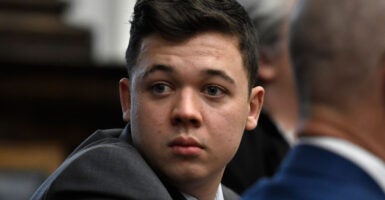 During and after the trial of Kyle Rittenhouse, pictured at the Kenosha County Court House on Nov. 17 in Kenosha, Wisconsin, one could hardly keep track of the insanity based on falsehoods recklessly peddled by media and politicians. (Photo: Sean Krajacic/Pool/Getty Images)

During and after the trial of Kyle Rittenhouse, the white 18-year-old accused of murdering two white men and injuring another, one could hardly keep track of the insanity based on falsehoods recklessly peddled by media and politicians.

In Chicago, the Rev. Jesse Jackson marched in the front line of a group of protesters where some chanted, “When black lives are under attack, what do we do?”

Black lives under attack? Rittenhouse is white, as were the two men he shot dead and the man he injured.

In September 2020, presidential candidate Joe Biden posted a video that included a picture of Rittenhouse, slamming President Donald Trump for “refusing to disavow white supremacists.” But the New York Post’s Miranda Devine wrote: “The accusation has become holy writ, but there is zero evidence. The FBI scoured Kyle’s phone and found nothing about white supremacy or militias, the court heard. All they saw were pro-police, ‘Blue Lives Matter’ posts from a kid who had been a police and fire department cadet, wanted to be a police officer or paramedic and once sat near the front of a Trump rally. That was enough for the media to brand him a white supremacist.”

PolitiFact claimed that Rittenhouse was illegally in the possession of a firearm: “The Wisconsin Department of Justice honors concealed carry permits issued in Illinois. But Rittenhouse did not have a permit to begin with, and he was not legally old enough to carry a firearm in Wisconsin.”

But The New York Times wrote: “The judge in Kyle Rittenhouse’s homicide trial on Monday dismissed the misdemeanor gun possession charge the teenager faced after defense lawyers argued that he did not violate the state statute in question because of his age and the length of the barrel of his semiautomatic rifle. … The statute says it applies to minors carrying a rifle or shotgun only if they are not in compliance with at least one additional statute (including) the prohibition of rifles with barrels less than 16 inches long.

“Mr. Rittenhouse was 17 at the time of the shootings. The judge threw out the charge after nobody in court disputed the length of the gun’s barrel.”

Rep. Karen Bass, D-Calif., said: “Here you have a 17-year-old boy who was driven by his mother across state lines with an automatic weapon—frankly, she should have been detained for child endangerment—to go to a protest.”

But Fackcheck.org wrote: “The Smith & Wesson semiautomatic rifle that Rittenhouse used in the shootings was already in Wisconsin, according to court testimony and police interviews. … Using money that Rittenhouse gave him, Dominick Black, a friend who also dated one of Rittenhouse’s sisters, bought the gun at a hardware store in Ladysmith, Wisconsin, in May 2020. Black, who was 18 at the time, purchased the gun for Rittenhouse, who at age 17 was too young to legally buy it for himself. In court this month, Black and Rittenhouse said they agreed that Black would hold onto the rifle until Rittenhouse turned 18 in January 2021, and that it would be kept at Black’s home in Kenosha.”

NAACP CEO Derrick Johnson said, “It’s hard to reconcile the verdict with the experience that many African Americans have faced over the several decades.” But reportedly the jury was not all white. Chicago’s WTTW reported: “It consisted of seven women and five men, all of them were white except one person of color.” If so, does that mean the other 11 white jurors browbeat “the person of color” into finding Rittenhouse not guilty on all five counts?

One more note of madness. Consider this tweet posted before the verdict by Gregory McKelvey, vice chairman of the Oregon Democrats Black Caucus: “Employers, consider giving your black employees a day or two off after the Rittenhouse verdict. Regardless of the outcome, it’s going to be hard for black people to work and it isn’t fair to expect them to.”

Why complain? This means I’m not required to write a column this week.