‘Hey, Here Is a Raise’: Why This Cookie Mogul Is Fighting for Tax Reform 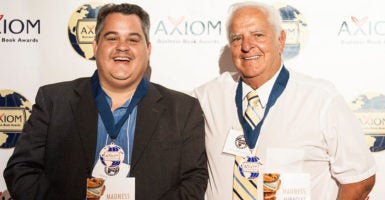 For a popular cookie maker whose business career began when he was just a kid, tax reform could mean expanding his sweet success with new operations and raises for his employees.

“So, we are always talking about how America is losing its jobs,” Joseph Semprevivo, founder, CEO and President of Joseph’s Lite Cookies, told The Daily Signal in a phone interview. “Well, we know the reasons why. We know it’s a really simple reason. It’s regulation, and it’s taxes, and it’s labor cost.”

He added, “When we get a tax cut … we will instantly be able to lower our prices internationally by 19, 20 percent and become more competitive overnight when they do that.”

Semprevivo’s business was born out of necessity. At the age of 9, he was diagnosed with diabetes.

“The doctors told my parents that I wouldn’t live past 17. That was a long time ago,” he said. As a diabetic, Semprevivo was not able try the gourmet ice cream that his father, who was a chef, made for guests at his parents’ restaurant.

“Every day after school, I made this gourmet ice cream with my dad,” he said, adding:

And I couldn’t eat it, though. So one day, I said, ‘I am going to make sugar-free ice cream.’ My parents said, ‘Go ahead. You know the recipe to the regular ice cream. Modify it, and make it sugar-free.’

So at the age of 12, Semprevivo said he invented the “very first sugar-free ice cream.”

The first recipe “came out like a block of ice,” so his dad perfected the ice cream recipe to make it more creamy, and thus did the young entrepreneur enter the business world.

“I said, ‘Let’s bring this to other diabetics,’” he said, adding:

So, we … opened up 197 stores with ice cream that were buying my ice cream, and we did this for about three years. I didn’t even have a driver’s license. My dad was driving me and a freezer van to each of the stores I was selling the ice cream [to]. I was loading up the freezers with ice cream.

After three years, “we got a call from a grocery store saying, ‘Freezer’s broke. We have to throw out a thousand pints.’ So we threw out the thousand pints,” Semprevivo said.

The problems with the ice cream business prompted Semprevivo to try something different, which was the springboard to Joseph’s Lite Cookies.

So, on a Saturday morning at 10 a.m. in 1986, Semprevivo’s parents made the “very first sugar-free cookie in the world.”

“It was the first cookie I ate … since I was a diabetic, I cried and said, ‘I want to share this with all my diabetic friends,’” he said.

Today, Semprevivo’s business, Joseph’s Lite Cookies, headquartered in Florida, makes about 12 million cookies per day at its New Mexico plant, with the products being sold across the country in stores such as the Big Lots, Dollar Tree, and Dollar General chains, and across the world. He said he wants to see a 15 percent corporate tax rate as part of any reform package.

“Ultimately, reform has to happen, but being a realist and understanding that Congress can’t decide what water to drink in a given day, going through a 75,000-page [tax] code is going to be very challenging for Congress,” he said, adding:

So, I am glad to initially see a tax cut at 15 percent. I think President [Donald] Trump has it perfect, and it needs to be a 15 percent tax [rate] on all pass-through entities, as well as individuals.

Sole proprietorships or partnerships are examples of pass-through entities.

Republicans released a tax framework Wednesday from House Speaker Paul Ryan, Senate Majority Leader Mitch McConnell, and other GOP leaders that would lower the corporate tax rate to 20 percent, which is “below the 22.5 percent average of the industrialized world,” according to the framework text. The current corporate rate is 35 percent.

Tax reform would free up cash for his business and all other small businesses, said Semprevivo, the author of “Madness, Miracles, Millions,” published in paperback in October 2013. Since business owners put large amounts of profit away to pay for taxes, he said, they are not able to use that money to grow their business and give bonuses to their employees. “So, a lot of small business owners save the money monthly, which means they are taking it away from their business to save it for taxes to pay,” Semprevivo said, adding: “So, what [a tax cut] does is, it unleashes the cash. When the minute this tax bill is passed, small business owners are going to start saying … ‘Hey, here is a raise.’”

He said he would  give the money saved from a tax credit to people in his business, such as Linda Pierce, who has worked for him for 27 years, and Mike Folkerds, who has worked at the company for more than 12 years.

“Why would I do that?” Semprevivo asked, answering his own question:

They have been loyal to me, and that’s my way of being loyal to them, No. 1; and No. 2, I don’t want to retrain somebody new. So I want to be competitive in wages, and the higher I drive their pay, the more likely they are going to stay with me till retirement, because I offer 401(k), health insurance, paid vacation.

I offer all of that, and so, I would want them to stay with me and not be recruited by another company. So, I would offer those individuals raises as well.

Adam Michel, a tax policy analyst at The Heritage Foundation, told The Daily Signal in an email that tax cuts for businesses are not what they are sometimes perceived to be.

“Most people think a corporate tax cut just means businesses get to make bigger profits, and those profits are passed on to the rich owners and corporate executives,” Michel said.

This is the opposite of what happens. First, most businesses in America are not large, multinational firms, but [medium-sized] and small businesses struggling to make ends meet.

A tax cut means that they can lower prices, invest in business improvements or expansions, and raise wages for their employees.

The historical evidence shows that when corporate tax rates are reduced, most of the benefit flows to workers in the form of higher wages.

With a tax cut and the ability to save money that would ordinarily go to cover taxes, Semprevivo said, he would also be able to grow his business.

Currently, Semprevivo’s business sells to other countries in English, but would like to update its packaging.

“We could take a greater risk to change packaging, putting it in other languages and selling it to other counties,” he said. “If we had the savings from taxes, we would alter the language to represent the home country that we are shipping it to.”