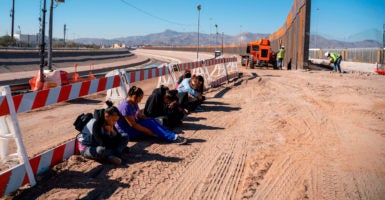 Wolf, who officially became the acting DHS secretary earlier in November, discussed a range of issues affecting his department.

“I think sanctuary city policies endanger communities. They make the men and women of [Immigration and Customs Enforcement] ICE, their job more difficult, so they are not protecting communities,” Wolf said in his first television interview since becoming acting chief. “They are endangering the communities, so I thought it was important in my first week to call that out and to stand with the men and women of ICE to do so.”

He visited North Carolina Monday, where he met with lawmakers, sheriffs, and angel families—people whose family members illegal aliens killed.

North Carolina has been the center of contention for federal immigration authorities in recent time. Several newly elected sheriffs across the state have announced their refusal to honor ICE detainer requests, choosing instead to allow criminal illegal aliens to be released from their custody and back into the community.

Wolf’s visit to the state highlighted the dangerous consequences of not cooperating with ICE.

“Part of my job is to make sure that the American people hear about that. The North Carolinians hear about that on what certain officials and jurisdictions in North Carolina are doing when they talk about sanctuary policies,” Wolf said. “And these are magnets and these are havens for criminals, and they make those communities less safe and not more safe, and it makes the officers of ICE, it makes their job more difficult and puts them in danger.”

“So we need to call it out and describe what it really is, and that is it is causing these communities to be less secure and more dangerous,” he continued.

Wolf approached the topic of President Donald Trump’s border wall and noted the administration has built 83 miles of wall and is “on track” to build between 450 and 500 miles by the end of 2020. The DHS chief swatted down the idea that the White House is simply replacing old barriers with new ones and called it a “fallacy.”

“I would say, if you are going to tear down a shack and … build a five or six bedroom house, you don’t call that a replacement shack. You call that a new house. So when we are building and we’re tearing down 7- to 8-foot shanty landing mat wall with an 18- to 30-foot wall, that’s new wall. It gives the Border Patrol, the agents at [Customs and Border Protection] new abilities that they’ve never had before,” Wolf said.

The DHS chief also touted new cooperation agreements between the U.S. and Central American governments, allowing authorities to better manage the immigration crisis by sending many asylum-seekers back to Guatemala and other Northern Triangle countries.