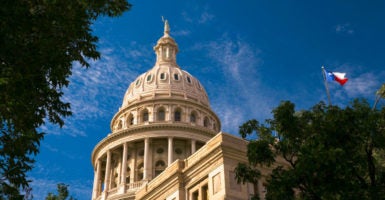 Texas Gov. Greg Abbott acted to protect the citizens of Texas on Sunday when he signed into law SB 4, a bill to punish (and deter) local cities and counties like Austin from implementing sanctuary policies.

Abbott and the legislators who sponsored this bill are trying to stop the Lone Star State from being a sanctuary for criminal aliens. They want to make sure that criminals are removed from the state and deported from the country, rather than remaining in Texas so they can victimize even more citizens of the state.

SB 4 requires local governments in the state to comply with federal immigration law. That includes 8 U.S.C. § 1373, which forbids state and local governments from preventing their officials from exchanging information with the federal government on the citizenship status of any individual.

Under the new Texas law, local governments can’t prevent their law enforcement officials from sending information to the feds on criminals they have arrested or detained.

Further, Texas law enforcement agencies are directed to “comply with, honor, and fulfill any request made in the detainer request provided by the federal government.”

This means that local jurisdictions that fail to honor federal detainer warrants—which are requests issued by federal immigration authorities to hold illegal aliens for pickup—will also be in violation of state law.

SB 4 imposes a civil penalty on sanctuary cities of up to $25,500 for each day of intentionally violating this law. In a fitting sense of justice, the civil penalties collected will be deposited in a special victim’s crime fund set up by the state.

This means that those who have been victimized by criminal illegal aliens will be able to seek compensation from this fund. Local law enforcement officials, such as sheriffs and chiefs of police, can also be charged with a Class A misdemeanor for failing to comply with federal detainer warrants.

Finally, local officials who refuse to comply with SB 4 and who implement sanctuary policies or ordinances can be removed from office. Petitions for their removal are filed by the attorney general of Texas, and such petitions will get the same precedence as election contests under Texas law.

This ensures that such petitions will not languish in court behind other cases. And Texas courts are directed to remove that official if he or she is found guilty—judges have no discretion to keep the official in office.

Abbott said he signed this bill because public safety is his top priority: “This bill furthers that objective by keeping dangerous criminals off our streets.”

Abbott added that it is “inexcusable to release individuals from jail that have been charged with heinous crimes like sexual assault against minors, domestic violence, and robbery.”

He said that such behavior by local officials would no longer be “tolerated,” and that SB 4 was “doing away with those that seek to promote lawlessness in Texas.”

Lt. Gov. Dan Patrick, who also supports the new law, pointed out that “in the past six years, criminal aliens have been charged with more than 566,000 crimes in Texas including kidnapping, homicide, burglary and much more.”

As he said, “there is no excuse for endangering our communities by allowing criminal aliens who have committed a crime to go free.”

>>> California Races to Become Sanctuary State, Shunning Federal Law and Its Own Residents

Given the large number of crimes committed by recidivist criminal aliens, the claim by some in Texas that this bill will make “our communities more dangerous” defies common sense.

As I have pointed out before, sanctuary policies endanger the residents of the very cities they are claimed to “help.” Criminal aliens who would otherwise be detained and removed from sanctuary cities are instead released back into the community, where they can commit more crimes.

One Government Accountability Office study of the criminal histories of 55,322 illegal aliens showed that they had been arrested 459,614 times and committed almost 700,000 offenses.

The vast majority of these crimes would never have been committed if we had a secure border that prevented these criminal aliens from entering the country in the first place, or if we had an effective policy of removing them once they did make it here, or after being detained or arrested for committing a crime.

The Texas governor and legislators are trying to protect their state’s residents from the reckless and irresponsible decisions being made by local jurisdictions to release criminal aliens and to obstruct enforcement of federal immigration law.

This is a good start and the right thing for them to do.