California Races to Become Sanctuary State, Shunning Federal Law and Its Own Residents 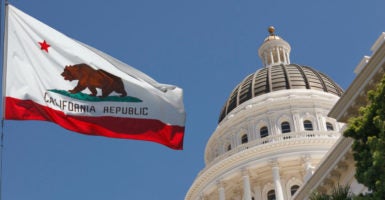 Senate Bill 54 passed the California Senate on Tuesday by a party-line vote of 27-12. (Photo: iStock Photos)

Lucky Luciano and other gangsters like Los Angeles mobster Simon Scozzari, an illegal alien who was finally deported back to Italy in 1962, would love the sanctuary bill rapidly making its way through the California Legislature.

It would implement a policy that ensures the entire state of California becomes a sanctuary for dangerous criminal aliens—like Juan Francisco Lopez-Sanchez, the seven-time convicted felon who shot and killed Kate Steinle in San Francisco in 2015.

Lopez-Sanchez was on the streets of San Francisco because of the city’s reckless sanctuary policy. When the city decided not to pursue a drug charge against him, it refused to honor a detainer warrant from Immigration and Customs Enforcement requesting that ICE be notified before San Francisco released Lopez-Sanchez so he could be picked up and deported.

Instead, because of the city’s sanctuary policy, Lopez-Sanchez was released and Steinle’s family lost their daughter to a senseless, entirely avoidable, brutal crime.

And this is the policy the California Legislature wants to institute throughout the state.

It wants to protect criminal aliens from being deported by banning local officials from sending any information to federal authorities about aliens who have been arrested or convicted and by not honoring federal detainer warrants like the one filed in San Francisco on Lopez-Sanchez.

This ill-considered action will endanger the safety of the law-abiding residents of the state. It is an irresponsible policy.

In just a one-week period in February, the U.S. Department of Homeland Security reported that 10 sanctuary jurisdictions refused ICE’s detainer requests to hold 540 criminal aliens. The majority of these were in California, including Los Angeles, Kern, San Diego, Orange, San Bernardino, and Santa Barbara.

The criminals who were released from custody, rather than turned over to ICE, included aliens convicted of domestic violence, assault, burglary, and cruelty toward a child.

The aliens released in other jurisdictions ranging from Colorado to Washington state were charged with, or convicted of, numerous crimes—including aggravated assault, robbery, indecent exposure, drug possession, forgery, sexual assault, larceny, and DUI.

Yet California would rather release these criminals into the community so they can assault, rob, and otherwise abuse even more victims than turn them over to the federal government so they can be removed from the country.

And we know that many of them will commit more crimes.

As I have pointed out before, the records of criminal aliens are truly shocking. According to the Department of Homeland Security, in just one eight-month period in 2014, more than 8,100 deportable aliens were released by sanctuary jurisdictions.

Three thousand of them were felons and 62 percent had a prior criminal record. Nineteen hundred of them were later rearrested a total of 4,300 times for 7,500 different criminal offenses.

A 2005 report from the Government Accountability Office that examined the criminal histories of 55,322 illegal aliens in federal, state, and local prisons revealed that they had been arrested 459,614 times and committed almost 700,000 crimes—an average of almost 13 offenses per illegal alien.

Those crimes ranged from murder to robbery to sex-related offenses. Eighty percent of the arrests occurred in just three states: California, Texas, and Arizona.

A 2011 report, also from the Government Accountability Office, showed more of the same. Just 215,000 criminal aliens in federal, state, and local prisons had been arrested nearly 1.7 million times for close to 3 million criminal offenses.

So there is no question that huge numbers of the criminal aliens being released by sanctuary jurisdictions will commit more crimes when they get out—crimes that would not occur if these criminals were not in the country.

According to this same report, California held 54 percent of the illegal aliens in prison across the country in 2008 for whom the federal government was reimbursing the state for some of its incarceration costs through a federal program.

About 50 percent of those inmates were in jail for drugs, assault, and sex offenses. The rest were in prison for everything from homicide to weapons violations.

The sponsors of this legislation will no doubt point to the fact that it makes an exception for certain violent felonies, although even that exception does not allow California officials to notify federal officials if they are holding such a criminal alien.

The exception only allows such officials to respond to an inquiry from the federal government—which means that ICE won’t be able to detain and pick up any violent criminals unless it already knows California has them.

And there are numerous other major felonies that are not included.

State Sen. Jeff Stone, for example, who represents Riverside County, points out that this exception would not cover serious crimes like human trafficking or child abuse. As he told CNN, “How many more Kate Steinles do we need?” Jim Steinle, left, father of murder victim Kate Steinle (in photo), testified before the Senate Judiciary Committee in 2015 about his daughter’s murder at the hands of a criminal alien. (Photo: Jonathan Ernst/Reuters/Newscom)

Perhaps the legislators who think aliens convicted of “nonviolent” crimes should not be deported should talk to David Kunhardt. His daughter and her friend were killed 10 years ago in Virginia Beach, Virginia, by an illegal alien driving a car with a 0.24 blood alcohol concentration as they sat at a stop light.

The alien had been previously convicted of public intoxication, identity theft, and DUI. Federal authorities were never notified of his prior convictions because of the sanctuary policy of Virginia Beach.

Alison Kunhardt and Tess Tranchant would be alive today if not for the city’s sanctuary policy.

One thing we know for certain: If California becomes a sanctuary state, then many more families like that of Kate Steinle or Jamiel Shaw, the 17-year old teenager who was killed in Los Angeles in 2008 by an illegal alien gang member, will be victimized by countless crimes committed by illegal aliens who shouldn’t be here.