Texas Wins the Second Round on Sanctuary Cities 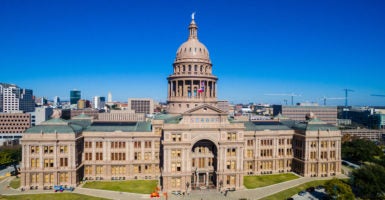 Texas has just won the second (procedural) round in the fight over the state Legislature’s attempt to punish cities that implement sanctuary policies.

A three-judge panel of the 5th U.S. Circuit Court of Appeals temporarily stayed on Monday key portions of the injunction issued in September by a federal judge in San Antonio that prevented the state from implementing major parts of the law.

The core parts of the law ban Texas cities from prohibiting or “materially limit[ing]” local law enforcement from:

The lower court federal judge had enjoined Texas from implementing the second and third provisions. However, the 5th Circuit issued a stay of that portion of the injunction.

Holding that Texas was likely to succeed on the merits of those two provisions, the 5th Circuit lifted the injunction until the appeals court has a chance to consider the merits of the case. Otherwise, the “state necessarily suffers the irreparable harms of denying the public interest in the enforcement of its laws.”

Prior case law holds that when it is a state appealing, the state’s “interest and harm merges with that of the public.”

According to the appeals court, the lower court judge misinterpreted federal law when he enjoined the Texas provision on cooperation and assistance with federal immigration authorities. The statute he cited, 8 U.S.C. §1357(g), actually “provides for such assistance.”

So Texas can “prohibit” local jurisdictions from engaging in such behavior, although the injunction remains in place on the phrase “materially limits” because that phrase needs “clarifying.” But being able to “prohibit” gives Texas what it needs in order to stop these sanctuary policies.

The appeals court also threw out the injunction on the section of the Texas law that requires local law enforcement to “comply with, honor, and fulfill” any immigration detainer request issued by U.S. Immigration and Customs Enforcement (ICE).

The 5th Circuit panel noted that local jurisdictions would not have to comply with a detainer request if the detainee “provide[s] proof” of lawful immigration status. Further, unlike the view of the lower court judge, this provision of the Texas law only “mandates that local agencies cooperate according to existing ICE detainer practice and law.”

This means that the most important provisions of the Texas statute that are intended to stop sanctuary policies from being implemented locally are still in force, and will remain in force until the 5th Circuit issues a decision on the merits.

That is vital to the public safety of the citizens of Texas. Sanctuary policies create sanctuaries for criminals.

According to PJ Media, an unreleased internal report from the Texas Department of Public Safety revealed that from 2008 to 2014, criminal aliens committed over 600,000 crimes in the state, including almost 3,000 murders.

Yet cities like Dallas and Austin, which are among the challengers in this litigation, are telling their residents that they would rather release criminal illegal aliens who have been convicted of crimes such as assault, burglary, sexual assault, theft, and even homicide into their local communities (where they can victimize even more people) than call federal immigration authorities so that they can be picked up and deported.

We can only hope the 5th Circuit realizes this when issuing its final decision on this Texas law.