How Does This Country, Neighbor of Iran and Friend of Israel, View the Iran Deal? 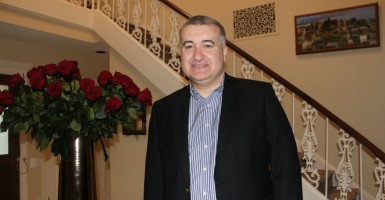 Elin Suleymanov, the Azerbaijani ambassador to the United States, in the lobby of his country's Washington D.C. embassy. (Photo: Josh Siegel/The Daily Signal)

Most of the world has a stake in a potential U.S.-led nuclear deal with Iran.

But some places are uniquely positioned to evaluate it.

Take Azerbaijan, a small country that borders Iran and Russia and is friends with Israel—the primary opponent of a deal with Tehran that would ease sanctions over the country in return for constraining its nuclear program.

Yet Azerbaijan, a prosperous democracy and ally of the United States, also shares heritage with Iran.

In fact, more ethnic Azerbaijanis live in Iran than in Azerbaijan. Both countries are majority made up of Shia Muslims, though Azerbaijan’s government is secular. Azerbaijan, which split from the Soviet Union to become an independent nation in 1991, once lived under the Persian Empire.

“Being a neighbor of Iran and having a very long border, we of course are very interested in normalization of relations in the region,” said Elin Suleymanov, the Azerbaijani ambassador to the U.S., in an interview with The Daily Signal.

In a Q&A below, Suleymanov, speaking from the Azerbaijan Embassy in Washington D.C., shares his country’s unique perspective on the potential Iran nuclear deal and forecasts what the pact would mean for the wider region.

The Daily Signal: As a neighboring country to Iran, does Azerbaijan support the U.S.-led deal over Tehran’s nuclear program?

Suleymanov: We welcome the agreement. And we hope the framework will bring down the tension in the region.

Being a neighbor of Iran and having a very long border, we of course are very interested in normalization of relations in the region. We are very concerned about potential instability.

I think the intention of having negotiations—to reduce the tensions and talk to the Iranians and bring down the threat of destabilization and weaponization of its nuclear program—is a very good one. Isolating Iran would not work. That has been shown.

We fully support talking to the Iranians and trying to figure it out.

Diplomacy is a good. The devil is in the details. What exactly are we talking about?

There are different version of the deal. Iran says one thing. The U.S. says other things.

It has become very confusing at the end of the day. There is a certain degree of confusion that could be dangerous.

Q: How could the nuclear agreement impact Azerbaijan? In other words, what are the stakes for Azerbaijan with these negotiations?

Iran is a major player in the region. Whatever happens to Iran affects us just like it affects the whole region.

It’s important American allies in the region, be it Azerbaijan, Saudi Arabia, Egypt, Turkey or Israel, all feel somewhat comfortable with the solution.

It is us who live in the region.

And don’t forget there is a significant number of ethnic Azerbaijanis living in Iran who are citizens of Iran.

Q: What would a good nuclear deal look like? What would you like to see in the agreement for you to support it?

For us, the most important thing is that the agreement is sustainable enough to last past the people who signed it.

Imagine the danger of an agreement that is unsustainable. It would cause even more potential instability.

Q: Is there a military solution to prevent Iran from developing a nuclear weapon? Is there an alternative to diplomacy?

A: I don’t see any alternative to diplomacy.

Any military engagement would be extremely detrimental for everybody involved. Elin Suleymanov, the Azerbaijani ambassador to the United States, believes that there is no military solution to confront Iran over its nuclear program. (Photo: Josh Siegel/The Daily Signal)

You can just imagine the regional chaos that would inflict on the whole region.

Realistically speaking, the tide is going the other way—towards lifting the sanctions—and it’s important whatever solution comes is sustainable and works.

Q: Do the ethnic Azerbaijanis living in Iran generally support a nuclear deal? What are their biggest concerns in the negotiations?

Q: Has the U.S. done a good job being inclusive with its allies, including Azerbaijan, throughout these negotiations? Why does it matter that the allies support these talks?

A: There has been some communication.

Of course we should be informed because we are their neighbor, but more important is that the agreement does not have negative regional implications.

Sometimes you have an agreement that causes more instability than stability.

If there was blatant violation of the nonproliferation regime, it’s not viable after that. It opens the door to a nuclear arms race.

It would be difficult to tell anybody else you can’t have nuclear weapons.

For us we already have one nuclear state on our border, Russia. We don’t need a second.

Q: What is the relationship like between the U.S. and Azerbaijan right now? Do you feel a commitment from America?

A: Azerbaijan is a partner with the U.S. in counterterrorism. We are a strong defense partner.

The long-term commitments and relationships to allies in the region is the most important thing here. We are one of few countries committed to post 2014 Afghanistan.

We have forces in Afghanistan. We provide civilian training for their police, customs and civil service. Forty percent of NATO military goods come through Azerbaijan. Azerbaijan has done its share. We have felt strong support of the U.S. for years.

But in some recent years, we have seen some detachment of the U.S. from the region, though it is getting somewhat better.

I keep saying if you have strong strategic vision for the region, and the U.S. as a superpower should, then all these bad things don’t pop up.

What happens is the others don’t see the commitment from the region.

A: There is a very distinct differences between Azerbaijan and Iran.

Azerbaijan is secular state. It is predominantly Shiite, just like Iran is.

But at the same time, Azerbaijan has strong separation of church and state. Iranians gather to show their support of the people of Syria and Iraq, in Tehran, Iran. (Photo: Maryam Rahmanian/Newscom)

Azerbaijan has had an indigenous Jewish community for 2,500 years.

So we have this quite inclusive, diverse society—secular and civil in nature—that is different than the Iranian version of a religious state.

Those differences matters in the region—they are different views on how you govern your state.

I don’t want say we are better or they are better. That is their choice, not ours.

Q: Does Azerbaijan worry about ISIS? What is the threat to Azerbaijan?

A: Of course ISIS is a concern. A few days ago several people were detained [trying to travel to fight with ISIS].

Azerbaijan has a law—welcomed by the U.S.—that anybody who fights in an outside conflict is subject to persecution.

It’s not a major problem, but the idea that even a single citizen could be affected by this somewhat bizarre propaganda is a concern.

It shows that even if you don’t have a vote or a stake in the conflict, the influences are still felt.

A: Think about Azerbaijan. We are much closer to [where terrorism exists] and we are a predominantly Muslim nation.

People do fall under the spell. That’s why for Azerbaijan, several things are a priority, like economic development and education.

Azerbaijan has a 99 percent-plus literacy rate.

It is important to maintain that. The more educated people are, the less likely they fall under this strange ideology. Having a strong economy and education system can help countries prevent the spread of terrorism. (Photo: Medyan Dairieh/Newscom)

And of course, appreciating the equality of men and women.

Too often when we talk about human rights, the Middle East, and democracy we forget that any civil society, any democracy, consists of certain blocks. It’s diversity, respect for minorities, gender rights. All these things are important.

I think there is a certain misunderstanding of how things work in the region from the outside.

Stability under any circumstance is most important. If you ask people in Iraq and Egypt, and Syria, Yemen and Afghanistan, the first thing they will tell you is they want stability. More than anything else.

Q: Why is the Middle East unstable?

A: Let’s look at what happened in Iraq and Syria.

One problem is the destabilization of Iraqi statehood and the somewhat hasty withdrawal [of troops]. You see what happens when places get abandoned—if you turn your back and are not committed to the future.

Obviously American troops should have withdrawn at some point. No one wants that forever.

But in the aftermath of a war or a conflict what is the sustainable alternative?

A withdrawal is okay as long as it builds a sustainable alternative.

We see now it is not only unsustainable, but also inevitable, that it will require the intervention of some international forces—most likely Americans. Because how else do you stop this?

Stability is based on gradual prosperity of the population.

Q: Lastly, Azerbaijan also shares a border with Russia. How much does the conflict in Ukraine concern you?

A: We are very concerned about what happened in Ukraine—a clear case of violating territorial integrity and weakening of state sovereignty.

When someone’s territorial integrity and sovereignty weakens, be it Iraq, Yemen, Afghanistan, Syria or Ukraine, there are tragic consequences. People die.

The case of Ukraine territorial integrity is not the first case of a former soviet state being violated. Supporters of the self-declared Donetsk People’s Republic stand in front of the occupied regional administration building in Donetsk, Ukraine, May 12, 2014. (Photo: Maxim Shipenkov/Newscom)

The first one was Azerbaijan—in 1991 the Republic of Armenia, our neighbor, violated Azerbaijan’s territorial integrity.

I feel that if the U.S. does not have a committed, strong, unequivocal position on territorial integrity and state sovereignty, those things are bound to repeat themselves.

They actually encourage it. Armenia is one of largest per capita recipients of U.S. aid.

I feel like my territorial integrity is less than somebody else’s. Let’s treat everybody equally.

I think the U.S. can be a great partner to its friends around the world, and it should stay so, and that takes a commitment to a strategic vision for the future.