As Trump Extends Emergency at Border, Here’s Why Arrests of Migrants Are Dropping 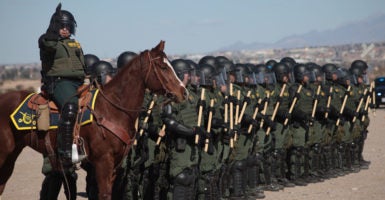 Border Patrol agents conduct a training exercise in the Anapra area, in front of the wall that divides Sunland Park, New Mexico, US, from Mexico, as seen from Ciudad Juarez, Chihuahua state, on Jan. 31. (Photo: David Peinado/NurPhoto/Getty Images)

While President Donald Trump extends his declaration of a national emergency to use Defense Department money to build the southern border wall, illegal immigration in January dropped by almost three-quarters from the peak of the border crisis last May.

Enforcement actions also decreased by 10% in January compared with December, according to numbers released by U.S. Customs and Border Protection officials.

The enforcement actions included 29,200 arrests and 7,479 “inadmissibility decisions”—meaning migrants’ asylum claims were adjudicated and they were sent back to their home country.

In a message to Congress on Thursday—almost a year since the president declared a national emergency at the border—Trump said he would extend that declaration beyond February.

“The ongoing border security and humanitarian crisis at the southern border of the United States continues to threaten our national security, including the security of the American people,” Trump said in the message to Congress, adding:

The executive branch has taken steps to address the crisis, but further action is needed to address the humanitarian crisis and to control unlawful migration and the flow of narcotics and criminals across the southern border. For these reasons, I have determined that it is necessary to continue the national emergency …

Trump was scheduled to speak Friday at the White House to a gathering of the National Border Patrol Council, the union representing the nation’s Border Patrol agents.

Much of the decline in immigration numbers has to do with the Trump administration’s Migrant Protection Protocols, said Lora Ries, senior research fellow for homeland security with The Heritage Foundation.

The Migrant Protection Protocols, enforced by the Department of Homeland Security, require an illegal immigrant who claims asylum to remain in Mexico to await his or her U.S. immigration court hearing. This procedure relies on cooperation from Mexico to keep migrants in that country until their cases are adjudicated.

The decline also is attributable to a combination of Trump administration policies, including the concept of  a “safe third country,” Ries said.

“Migrants who fear for [their] safety should go to the first safe country, not the one that has the best economy,” Ries said.

Successful implementation is because of “agreements DHS has in place with Mexico and Central American countries,” she said.

The so-called Northern Triangle countries of El Salvador, Guatemala, and Honduras provided most of the thousands of Central American migrants who joined “caravans” to the U.S. border in 2018. Those countries now cooperate more with U.S. immigration enforcement, officials say.

Customs and Border Protection took a total of 36,679 enforcement actions in January, representing a 74.5% decrease since the peak of the border security crisis in May 2019. This was a 10% drop in such actions from the previous month.

The numbers also reflect an 11% decline in Border Patrol apprehensions from December, as well as a nominal 4% decline in inadmissible aliens at ports of entry.

“We continue to see positive results because of the steps taken by the Trump administration to control the border and uphold the rule of law,” acting Customs and Border Protection Commissioner Mark Morgan said in a formal statement.

In January, Border Patrol agents discovered the longest cross-border tunnel ever found, Morgan said. The tunnel stretched more than three-quarters of a mile from Tijuana, Mexico, to the San Diego area of California. Officials described it as longer than 14 football fields.

We’ve seen eight straight months of decline, but as we see from the seizure of the longest-ever tunnel between the U.S. and Mexico and significant drug seizures, much work remains. We hope that Congress will finally act to address the ongoing crisis on the southwest border and pass meaningful legislation to strengthen our immigration system.

The decline in illegal immigration could be partly seasonal and might not continue, Heritage’s Ries said, but enforcement likely will keep the numbers from rising to the previous level.

The trend makes the flood of illegal immigrants that led to the controversy over separation of families less likely, Ries said.

“The problem was detention beds. If you were busting out the ceiling—or have caravans—it leads to releases,” she said. “When you control the numbers, beds open up and you can house families together.”

This report was modified a few hours after publication to explain more accurately the “safe third country” concept, Migrant Protection Protocols, and Lora Ries’ comments on both.