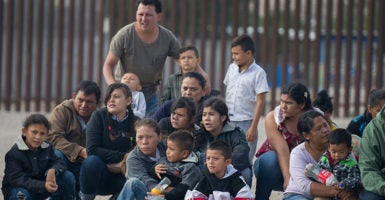 Migrants wait to be processed and loaded onto a bus by Border Patrol agents after being detained when they crossed illegally into the United States from Mexico on June 2. in Sunland Park, New Mexico. Recently immigration officials have seen a surge in the number of asylum seekers arriving at the border. (Photo: Joe Raedle/Getty Images)

The surge of illegal immigrants coming across the southern border in May increased by about one-third from a month before.

The Central American migration boom that has been overwhelming Border Patrol agents for almost a year, but they took 144,278 illegal border crossers were apprehended according to U.S. Customs and Border Protection.

“This latest number demonstrates that we are in an absolute crisis when it comes to the security of our border; we are being overwhelmed by a flood of illegal aliens and it really is a national emergency as the president has said,” Hans von Spakovsky, a senior legal fellow at The Heritage Foundation, told The Daily Signal.

“It is imperative that Congress act to give the president the resources he needs to regain control of our border and to close the loopholes in federal immigration law that are helping spur this problem,” von Spakovsky added.

May’s number is a 32 percent increase from April, the Washington Post reported. This marked the highest single month arrest total in 13 years, the Post reported.

“We are in a full-blown emergency, and I cannot say this stronger: the system is broken,” Acting CBP Commissioner John Sanders said in a conference call with reporters.

Sanders was quoted by the Post saying the agency detained more than 680,000 border-crossers in the past eight months, “more than the population of Miami.”

“I regularly speak to members of our Border Patrol who view the realities of these numbers every day,” Biggs said in a statement. “They are overrun, and their ranks are depleted – and their morale is deteriorating. Border Patrol agents are supposed to enforce our laws, but their legislators have utterly failed to give them the resources required to complete their responsibilities.”

Biggs continued that Trump understands the gravity of the matter.

“President Trump realizes that he must take drastic measures to do what Congress is unwilling to do,” Biggs said. “I implore the administration to immediately exhaust all remaining executive actions to slow this crisis. This is a national emergency, and our leaders must take action to protect Americans and the sovereignty of our great nation.”

This week, a federal district judge gave Trump a victory in a lawsuit by House Democrats seeking to block construction of a border wall.

May was the third consecutive month apprehensions at the border exceeded 100,000. The immigration is coming mostly from Guatemalan and Honduran parents bringing children, and asking for asylum. Under existing U.S. law, making an asylum claim and being accompanied by children usually leads to catch and release.

“Once we figure out where they come from, then they’re set up for a court date, wherever they’re going,” Laredo sector Border Patrol deputy chief Joel Martinez told The Daily Signal in May.

“Once they do that, of course, because of the Flores renew agreement and everything else, we’re kind of limited as to how long we can keep them in custody, so instead of keeping them in custody and waiting for their court date, we have to release them out in the public,” Martinez said. “And then we count of them, through the honor system, to show up for court, which is not always the case.”

The CBP is beyond capacity. In late May, near El Paso, the Border Patrol arrested 1,045 illegal border crossers in one day.

Laredo, which has a lower traffic area than some of the others border areas in Texas, provides assistance to other stations, Martinez noted.

“Every single Border Patrol station in Rio Grande Valley is way above 100% capacity,” Martinez said. “We have to do something to help relieve the pressure over there. So we’re pretty much their safety valve when it comes to when they get overcrowded, we start taking bodies in to help process, to help feed, to help care for these people. Because it is a humanitarian crisis when you get down to it.”