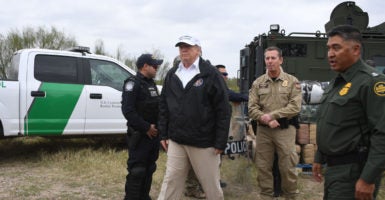 President Donald Trump has said he might declare a national emergency on the border if Congress doesn't approve $5 billion for a border wall. (Photo: Jim Watson/Getty Images)

President Donald Trump has asked Congress for $5.7 billion to build a wall along the southern border. He has said that, if necessary, he may declare a “national emergency” and act unilaterally, and that he has the authority to do so.

In brief, Trump has a strong argument to make that he, in fact, has the authority to act unilaterally. But in order to explain why, let me lay out the relevant facts.

In his prime-time address Tuesday night and through other information that has been disseminated by the White House, the president began to lay the groundwork for declaring a national emergency.

Here are some of the points the administration has been making for its case:

Should the president decide to act unilaterally, he would invoke the National Emergencies Act, a post-Watergate reform statute that was enacted in 1976 and signed into law by President Gerald Ford.

Prior to the enactment of the National Emergencies Act, many presidents, relying on their implied constitutional authority, had simply declared national emergencies when they believed it was warranted. President Harry Truman’s order to the secretary of commerce to seize control of the steel mills to stop a strike during the Korean War would be one example, although that order was ultimately declared unconstitutional by the Supreme Court.

Since the National Emergencies Act was enacted, presidents have declared national emergencies on numerous occasions (including three times by Trump), 31 of which are technically still in effect.

The National Emergencies Act was designed in part to provide some structured procedures for a president to follow when he declares a national emergency. Under the act, a president who declares a national emergency must notify Congress that he has done so and must delineate what other existing laws he is relying upon to justify that declaration and what emergency powers he can exercise under those laws.

In a recent study, the Brennan Center for Justice at the New York University School of Law identified 136 different provisions of law granting a president a range of powers he can exercise if he declares a national emergency. The powers that a president can utilize under such circumstances can be quite broad. Indeed, the Congressional Research Service has said:

Under the powers delegated by such statutes, the president may seize property, organize and control the means of production, seize commodities, assign military forces abroad, institute martial law, seize and control all transportation and communication, regulate the operation of private enterprise, restrict travel, and, in a variety of ways, control the lives of United States citizens.

Although it is always perilous to speculate about what authorities the president might cite should he declare a national emergency, there are a few likely candidates.

There is a provision in the Immigration and Nationality Act that gives the president authority to tap into an Immigration Emergency Fund in the case of an “immigration emergency,” which is defined as:

[A]n actual or imminent influx of aliens which either is of such magnitude or exhibits such other characteristics that effective administration of the immigration laws of the United States is beyond the existing capabilities of the Immigration and Naturalization Service … in the affected area or areas. Characteristics of an influx of aliens, other than magnitude, which may be considered in determining whether an immigration emergency exists include: the likelihood of continued growth in the magnitude of the influx; an apparent connection between the influx and increases in criminal activity; the actual or imminent imposition of unusual and overwhelming demands on law enforcement agencies; and other similar characteristics.

It is highly unlikely, however, that this vehicle would provide sufficient resources to build the wall, since Congress appropriates only $20 million per year for that fund.

There are two other laws that the president might cite, but both come with some important caveats.

The first would apply if a president were to declare a national emergency “that requires the use of the armed forces.” If that were to happen, the secretary of defense could authorize the military departments to “undertake military construction projects … that are necessary to support such use of the armed forces” so long as the amount spent on such projects does not exceed “the total amount of funds that have been appropriated for military construction, including funds appropriated for family housing, that have not been obligated.”

The second would apply if a president were to declare a national emergency “that requires or may require the use of the armed forces.” If that were to happen, the defense secretary would be empowered to “(1) terminate or defer the construction, operation, maintenance, or repair of any Department of the Army civil works project that he deems not essential to the national defense, and (2) apply the resources of the Department of the Army’s civil works program, including funds, personnel, and equipment, to construct or assist in the construction, operation, maintenance, and repair of authorized civil works, military construction, and civil defense projects that are essential to the national defense.”

Utilizing one of these authorities, the president does have a valid case to make that he has the authority to act unilaterally.

Regardless of which laws he relies upon, if the president chooses to declare a national emergency under the National Emergencies Act, it is inevitable that someone with legal standing will file a lawsuit (likely several, in fact) in federal court challenging him, and they will look for a friendly forum in which to file those lawsuits. The challengers will no doubt assert what Sen. Chuck Schumer, D-N.Y., and House Speaker Nancy Pelosi, D-Calif., said the other day—that this is a “manufactured crisis” and that the president lacks authority to build the wall.

When it comes to matters touching upon national security, courts are often reluctant to step in and second guess a president, leaving it to the other two branches of government to battle it out and reach a political resolution. However, as was made quite clear during the recent challenges to the president’s so-called travel ban, some federal judges are not reluctant at all about second guessing Trump, going so far as to enter nationwide injunctions against the administration.

That may well happen again. If it does, that will increase the likelihood that the Supreme Court will ultimately weigh in on this issue, just as it did in the travel ban case.