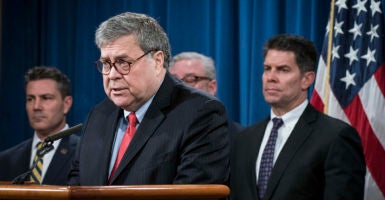 Attorney General William Barr participates in a press conference at the Department of Justice on Feb. 10, 2020.(Photo: Sarah Silbiger/Getty Images)

Attorney General William Barr said Monday that the Justice Department has set up an “intake process” to handle Ukraine-related information from Rudy Giuliani, but that the agency is being “very careful” with what the Trump lawyer has provided.

“We have to be very careful with respect to any information coming from Ukraine. There are a lot of agendas in the Ukraine, there are a lot of cross-currents,” Barr said at a press conference to announce charges against four members of the Chinese military in the 2017 hack of Equifax.

“We can’t take anything we receive from the Ukraine at face value.”

Barr was responding to a question about comments Sunday from Sen. Lindsey Graham, who said he spoke with the attorney general about Giuliani’s efforts to collect information on Joe and Hunter Biden’s dealings in Ukraine.

Giuliani has for months claimed to have evidence showing that former Vice President Joe Biden intervened in 2016 to help shut down an investigation of Burisma Holdings, a Ukrainian energy firm that paid Hunter Biden more than $80,000 a month as a board member.

Biden has denied trying to help his son or Burisma.

But Graham also expressed concerns about the veracity of Giuliani’s information, and said he’s concerned it could be the result of a Russian disinformation campaign.

“If Rudy Giuliani has any information coming out of the Ukraine he needs to turn it over to the Department of Justice because it could be Russian propaganda,” Graham said in a CBS News interview.

Barr confirmed speaking with Graham and echoed his concerns about the quality of Giuliani’s information.

Barr said that the Justice Department established an “intake process in the field” in order to scrutinize information coming in from Ukraine.

“That is true for all information that comes to the Department related to the Ukraine, including anything that Mr. Giuliani might provide,” he said.

More than a year ago, Giuliani began working with two business associates, Lev Parnas and Igor Fruman, to collect information from Ukraine about the Bidens as well as about Marie Yovanovitch, the former U.S. ambassador to Ukraine.

Parnas and Fruman, who were indicted on Oct. 10, 2019, on campaign finance charges, helped set up interviews for Giuliani and two former Ukrainian prosecutors, Yuri Lutsenko and Viktor Shokin.

Text messages that Parnas has provided to Congress since his indictment show that he and Giuliani worked together to collect and disseminate information about the Bidens and Yovanovitch to conservative media outlets.

Giuliani is also reportedly the target of an investigation in the Southern District of New York, which is handling the case against Parnas and Fruman.