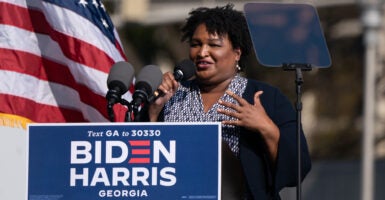 Stacey Abrams, the unsuccessful Democratic nominee for Georgia governor in 2018, speaks at a get out the vote rally Nov. 2 in Atlanta. (Photo: Elijah Nouvelage/Agence France-Presse/Getty Images)

After winning the vote in the Electoral College last week, former Vice President Joe Biden said the election process “should be celebrated, not attacked.”

Biden derided what he called “baseless claims about the legitimacy of the results” of the presidential election and said, “Respecting the will of the people is at the heart of our democracy, even if we find those results hard to accept.”

Abrams established Fair Fight Action in 2014, four years ahead of her gubernatorial bid, but the organization took a decidedly more political turn after her loss and sued the state of Georgia, alleging a rigged election that she lost by about 55,000 votes.

Jose Morales, the deputy director for voter protection at Fair Fight Action, is serving on the agency review team to pick Biden administration staffers for the Justice Department.

Morales is working for the Biden transition team as a volunteer. The Justice Department review team will evaluate incoming staff for the department, as well as for the Federal Election Commission, the U.S. Election Assistance Commission, the Commission on Civil Rights, the National Council on Disability, the United States Access Board, AbilityOne, the State Justice Institute, and the Legal Services Corp., according to the transition team’s website.

“Stacey Abrams is the leader of the conspiracy wing of the Democratic Party, assuming every election they don’t win is rigged,” Adams told The Daily Signal.

Still, the inclusion of an Abrams staffer on the Biden transition team is not surprising, he said.

“I can think of 50 names for the transition team worse than his. This is not unexpected,” Adams added.

Before that, Morales was the community engagement and projects director at the National Democratic Redistricting Committee, a group dedicated to drawing up more favorable congressional maps for Democrats run by former Attorney General Eric Holder.

He also worked for the Democratic Congressional Campaign Committee, and as a programs associate at the New Organizing Institute, a liberal group of trained digital organizers promoting Democratic campaigns and progressive political causes. The Washington Post called the group “the Democratic Party’s Hogwarts for digital wizardry.”

“I would like to know: Does this gentlemen have anything to do with picking staff to oversee election law, and does he believe that Stacey Abrams is the rightful governor of Georgia?” Capital Research Center President Scott Walter told The Daily Signal.

Walter added that this could be one example of a more politicized Justice Department under Biden.

“Everything he has done has been pure partisanship,” he said. “What qualifications does he have for hiring people at DOJ? It could be a sign we are going back to the days of Eric Holder, when the DOJ was just a piece of the political machine.”

Founded as the Voter Access Institute in 2014, the organization changed its name to Fair Fight Action after Abrams lost the 2018 governor’s race to now-Georgia Gov. Brian Kemp, a Republican.

The organization also changed its bylaws that prohibited it from getting directly or indirectly involved in elections. The change was made with the Georgia Secretary of State’s Office in December 2018.

Abrams has denounced what she calls voter suppression across the country.

Fair Fight sued the state of Georgia, claiming minorities were denied the right to vote because of “discriminatory voting barriers reminiscent of the Jim Crow era.”

The lawsuit didn’t try to reverse the outcome of the 2018 Georgia gubernatorial election, but did call for the state to stop updating voter rolls and to ban touch-screen voting machines.

The lawsuit also accuses Kemp of using his former position as secretary of state, with oversight of state elections, to try to prevent minority voters from casting ballots.

In a loss for Abrams in December 2019, the U.S. District Court for the Northern District of Georgia ruled it would not order the state to reinstate all of the voters removed from the registration rolls because of inactivity.