How Obama’s Post-Presidency Could Affect Your State Legislature 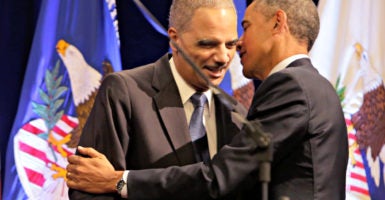 A national effort by Democrats to redraw legislative districts will be boosted by President Barack Obama and former Attorney General Eric Holder, here at the unveiling of Holder's portrait at the Justice Department in February 2015. (Photo: Chris Kleponis/ CNP/Newscom)

During his final State of the Union address, President Barack Obama insisted that one means of ending the nation’s polarized political environment is changing how the states draw congressional and state legislative districts.

“If we want a better politics, it’s not enough just to change a congressman or change a senator or even change a president. We have to change the system to reflect our better selves,” Obama said. “I think we’ve got to end the practice of drawing our congressional districts so that politicians can pick their voters, and not the other way around. Let a bipartisan group do it.”

Obama apparently plans to devote much of his post-presidency to the cause of moving congressional and state legislative districts in Democrats’ favor.

Politico first reported that former Attorney General Eric Holder, an Obama appointee and friend, will be chairman of  a new group called the National Democratic Redistricting Committee that was established in “close consultation” with the White House.

Elisabeth Pearson, executive director of the Democratic Governors Association, will be president of the organization.

“An ex-president will have access to almost limitless amounts of money to fuel efforts to manipulate the political system,” @ElectionLawCtr says.

The Democratic Legislative Campaign Committee, which focuses on raising money and campaigning for Democrats running for state legislatures, expects the new organization will align with its efforts to win back statehouses before the 2020 Census and subsequent redistricting, spokeswoman Carolyn Fiddler said.

“DLCC is thrilled that former Attorney General Holder and President Obama are engaging in this crucial effort,” Fiddler told The Daily Signal. “Redistricting and state legislative elections are vital to the future of the Democratic Party, and the president’s involvement will help drive that fact home to a broad audience.”

The new National Democratic Redistricting Committee is a “527,” a name derived from a section in the federal tax code, which means it is an organization dedicated to influencing policy or elections and may raise unlimited amounts of money from corporations and labor unions.

In a widely published statement last week, Holder seemed less concerned about better politics and more about partisanship when he said:

American voters deserve fair maps [of election districts] that represent our diverse communities—and we need a coordinated strategy to make that happen. This unprecedented new effort will ensure Democrats have a seat at the table to create fairer maps after 2020.

The White House didn’t respond to inquiries from The Daily Signal on the effort, nor did  the Democratic Governors Association. Holder also did not respond to an inquiry left on his voicemail at Covington & Burling law firm, where he is a partner.

While the president seemed to rail against the practice of gerrymandering by calling for a bipartisan commission to redraw legislative districts, the National Democratic Redistricting Committee reportedly is focusing on state legislative and gubernatorial races, election-related litigation, and voter initiatives at the state level. The goal: Rebuild a bench of future Democratic candidates for state and national offices.

“Over the past eight years the president has seen firsthand Republicans pulled to the far right for fear of a primary challenge instead of trying to govern from the center,” White House spokesman Eric Schultz told the newspaper.

While some of these losses could be blamed on the way Republican-controlled state legislatures drew up maps for legislative districts, it can’t explain why Democrats lost 13 U.S. Senate seats and 11 governorships during statewide elections over Obama’s nearly eight years in office.

Obama’s backing of the organization after his presidency is drawing attention because, as The Washington Post reported, it “marks a rare, if not unprecedented, step in the modern era.”

Obama’s affiliation with the group is likely a means to rake in large donations, said J. Christian Adams, a former Justice Department lawyer and an expert on elections who was a critic of Holder’s actions as attorney general.

“This is about raising the dollars to swamp Republican efforts,” Adams, president of the Public Interest Legal Foundation, told The Daily Signal. “An ex-president will have access to almost limitless amounts of money to fuel efforts to manipulate the political system to advantage the left.”

Every 10 years after the Census, states complete redistricting for congressional and state legislative districts. States generally are free to conduct redistricting how they choose as long as it adheres to the “one man, one vote” principle laid out by the Supreme Court in 1962.

Democrats and Republicans have complained for years about state legislatures seeking to draw the lines of district maps so that the results are favorable to the dominant party’s interest.

The complaining party typically depends on who has the advantage in a particular state. The practice of drawing up such districts commonly is known as gerrymandering.

In response to complaints, 13 states established special commissions to draw state legislative boundaries, taking redistricting out of the hands of the legislature—similar to what Obama, in his State of the Union address, said a bipartisan group should do.

However, such commissions haven’t always made the process less political, said Wendy Underhill, program director for the National Conference of State Legislatures. That’s because even nominally bipartisan commissions frequently have a party advantage.

“It’s not necessarily a given it will have a less political outcome just because you have a commission,” Underhill told The Daily Signal. “It depends on the rules and the makeup of the commission.”

In some of the 13 states, Arizona and California among them, the commissions are made up of nongovernment members and include an equal number of Republicans, Democrats, and independents.

In Ohio, where a commission will go into effect after 2020, the body will be made up of the governor, auditor, secretary of state, and four others appointed by majority and minority members of the general assembly.

In Arkansas, a board is made up of the state’s governor, attorney general, and secretary of state. Currently, all these officials are Republicans, so redistricting decisions likely would have a partisan tilt.

Even if each of the three elected Arkansas officials were not of the same party, a majority party likely would have a 2-1 advantage in determining the makeup of legislative districts. So, redistricting in Arkansas would not be void of politics.