8 Things to Know About Stacey Abrams 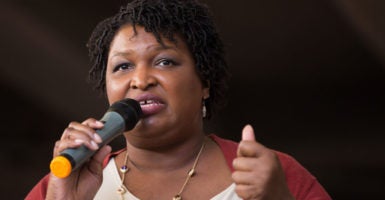 "I wouldn’t oppose it," Stacey Abrams has said of noncitizen voting in some elections. Abrams, who lost the Georgia race for governor in November, will deliver the Democrats’ rebuttal Tuesday night to President Donald Trump’s State of the Union address. (Photo: Jessica McGowan/ Stringer/Getty Images)

Stacey Abrams, the former minority leader of the Georgia House of Representatives who lost a race for governor in November, will deliver the Democrats’ rebuttal Tuesday night to President Donald Trump’s State of the Union address.

Here’s eight things you should know about Abrams:

Abrams, 45, said on the PBS show “Firing Line” that she isn’t opposed to people who aren’t U.S. citizens voting in local elections.

The show’s host, Margaret Hoover, had asked Abrams about jurisdictions such as San Francisco that allow noncitizens to vote in some local elections, Fox News reported.

“I think there’s a difference between municipal and state and federal,” Abrams responded. “The granularity of what cities decide is so specific, as to, I think, allow for people to be participants in the process without it somehow undermining our larger democratic ethic that says that you should be a citizen to be a part of the conversation.”

“So, in some cases, you would be supportive of noncitizens voting?” Hoover asked.

2. She Wants to Turn Georgia Blue

“I need everyone to understand that Georgia is not only viable—we took a congressional seat that was drawn for [former House Speaker] Newt Gingrich and we won that seat,” Abrams said during a podcast interview with Politico published Jan. 18.

“So while I did not claim the ultimate prize [in the governor’s race], we transformed the electorate of the state in a way that cannot be reversed,” she said. “And every candidate, especially everyone who thinks they want to be president, needs to understand that the road to success comes through Georgia.”

Abrams lost the governor’s race to Republican Brian Kemp, then Georgia’s secretary of state, claiming 48.8 percent of the vote to his 50.2 percent.

3. She Wants to Promote ‘Race and Gender’ Issues

“I recognized that issues of race and gender and the intersectionality scares people and therefore, my responsibility was to confront it and talk about it and demystify it,” Abrams said in the podcast interview with Politico.

She added that “ignoring it wasn’t going to work.”

“But it also gave me the space to have conversations that we normally do not have in politics, especially in the Deep South, and I am proud of the fact that as a woman and as a woman of color, I was able to create a pathway where more women can do this,” she said.

“So yes, they’re going to be discouraged, but hopefully, they will see from the tremendous results we had that it’s worth the fight.”

4. She Was Endorsed by Planned Parenthood

The Planned Parenthood Action Fund endorsed Abrams in the Georgia governor’s race, saying voters should choose her because she is “a fierce advocate for reproductive health and rights” and that “a vote for Stacey Abrams is a chance to make U.S. history.”

“We need to elect candidates who reflect the communities they serve,” read the endorsement on the website of the abortion provider’s political arm. “If elected, Stacey Abrams would be the first black woman governor in this nation’s history, period.”

5. She Is ‘Sick and Tired’ of Free Market Role in Health Care

Abrams said in October that she doesn’t think the free market can be the solution to rising health care costs and limited insurance options.

“I am sick and tired of hearing about the free market being the solution to this problem, because I’ve never seen the free market write a prescription in rural Georgia,” Abrams said.

“I mean, I’ve never seen the free market show up and give someone Metformin so they can have a little bit of control of their diabetes before it turns into an amputation of their foot.”

“I think it’s a good word,” Abrams said of the word “liberal” in a May interview on Fox 5 Atlanta. “I think progressive—I also like Democrat.”

7. She Says the AR-15 Doesn’t Belong in Civilian Hands

The lightweight semi-automatic rifle known as an AR-15 should not be used by civilians, Abrams said in an October interview on ABC’s “The View.”

Heritage Foundation legal scholars John Malcolm and Amy Swearer write that AR-15s are “commonly used as self-defense weapons in the homes of law-abiding citizens because they are easier to control than handguns, are more versatile than handgun.”

“I do not believe like weapons of mass destruction like the AR-15 belong in civilian hands,” Abrams said on “The View.” “I think it should be prohibited from civilian use.”

8. She Is a ‘Romance’ Novelist

Under the pen name Selena Montgomery, the former Democrat candidate for governor of Georgia has written sexually explicit romance novels, including the books “Secrets and Lies,” “Reckless,” and “Hidden Sins.”

“She propped herself up, gave herself the satisfaction of studying him,” reads a passage in “Deception,” one of her novels. “Such a beautiful man. Lean, muscular, and amazingly agile.”