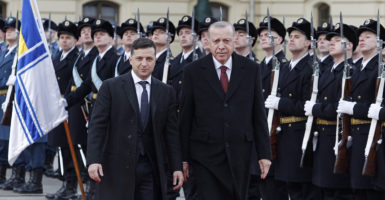 KYIV, Ukraine—Turkish President Recep Erdogan joined Ukrainian President Volodymyr Zelenskyy on Monday outside Kyiv’s 18th-century Mariyinsky Palace to review an honor guard of Ukrainian troops. A band played the anthems of both countries. Along the nearby streets, Turkish and Ukrainian flags hung side-by-side on light poles.

The Mariyinsky Palace originally was built as a residence for the Russian Czars. Thus, it was a fittingly symbolic place for the two leaders to meet on the day Erdogan announced $36 million in Turkish military aid for Ukraine—a country currently at war against Russian forces in its southeastern Donbas region.

“We fully support and will support the sovereignty and territorial integrity of Ukraine, including Crimea,” Erdogan told reporters Monday in Kyiv, referring to a Ukrainian peninsular territory that Russia invaded and illegally annexed in 2014.

Erdogan’s visit to Ukraine came at a time of heightened tensions between Turkey and Russia. The day before, Feb. 2, seven Turkish soldiers and one civilian were killed in Syria by forces loyal to Bashar al-Assad, Syria’s Russian-backed dictator.

In turn, Erdogan reportedly told Russia “to not stand in our way” as Turkey retaliated against Syrian government forces with airstrikes and artillery.

“Those who test Turkey’s determination with such vile attacks will understand their mistake,” Erdogan said, adding: “It is not possible for us to remain silent when our soldiers are being martyred.”

Amid the backdrop of Ankara’s latest row with Moscow, some saw Erdogan’s offer of military aid to Ukraine as a direct rebuke of Russia’s support for Assad.

Yet, according to Luke Coffey, director of The Heritage Foundation’s Douglas and Sarah Allison Center for Foreign Policy, Turkey has had a “complicated” relationship with Russia for a long time—well before the current war in Syria.

“For centuries Russia and Turkey have been competitors, and at times enemies, in the Black Sea, the South Caucasus, and in the Middle East,” Coffey said.

Those historically fractious Russo-Turkish relations have certainly had their highs and lows in recent years.

In November 2015, a Turkish F-16 fighter shot down a Russian Sukhoi Su-24M attack aircraft near the Syria–Turkey border. Less than four years later, however, Ankara took possession of S-400 surface-to-air missile systems it had purchased from Russia. The move strained Ankara’s relations with the U.S. and other NATO allies.

The Turkish military went on to test its Russian missiles against U.S.-made F-16 fighter aircraft—the same type used to shoot down the Russian Sukhoi in 2015.

After the S-400 deal, Turkey’s relations with Russia seemed to be on the mend. For one, a new gas pipeline connecting Russia to Turkey under the Black Sea just recently went online, allowing Gazprom, Russia’s national gas conglomerate, to bypass Ukrainian transit pipelines, which have moved Russian gas to Europe since the Soviet era.

Known as TurkStream, the new Russian pipeline comprises two strings, each of which has the capacity to deliver 15.75 billion cubic meters annually. According to information on Gazprom’s website, the first string is meant to deliver gas to Turkey, while the second string will directly deliver Russian gas to southeastern Europe.

Yet, tensions over the war in Syria have soured the budding bonhomie between Russian President Vladimir Putin and Erdogan. So, too, has Russia’s systematic persecution of a Turkic ethnic group living in Crimea—the Tatars.

“Turkey has been one of the most vocal supporters of Ukraine’s territorial integrity and has been one of the only Muslim-majority countries in the world to criticize Russia’s treatment of the Crimean Tatars,” Heritage’s Coffey said. “This is why, when commentators and pundits say that Turkey has shifted its foreign policy to be more aligned with Russia, they fail to understand these old divisions that exist.”

Erdogan and Zelenskyy signed a sweeping bilateral agreement, pledging a tighter strategic partnership between their two countries with the goal of doubling bilateral trade to $10 billion by 2023.

“We need to strengthen strategic partnership in the economic field,” Zelenskyy told reporters. “We talked about everything: roads, housing, and enterprises.”

“We are looking forward to developing cooperation to step up security in the region by exchanging information on the naval situation in the Black Sea region, as well as enhancing air defense capabilities,” Ukrainian Defense Minister Andriy Zagorodnyuk told reporters.

New Kid on the Block

Erdogan’s visit to Kyiv came only three days after U.S. Secretary of State Mike Pompeo made a long-awaited visit to the Ukrainian capital city.

The back-to-back visits by delegations from NATO’s two most powerful militaries underscore how Ukraine is playing an increasingly outsized role in counterbalancing Russia’s destabilizing influence across Eastern Europe.

“The Ukrainian people should know the United States understands that Ukraine is an important country,” Pompeo said in Kyiv on Jan. 31. “It’s not just the geographic heart of Europe. It’s a bulwark between freedom and authoritarianism in Eastern Europe.”

Ukraine has been locked in a stalemated, static trench war against Russian forces in its southeastern Donbas region since April of 2014. Over the course of the war, Ukraine has revamped its armed forces to meet the immediate needs of combat in the Donbas. Yet, looking forward, Ukraine’s military aspirations extend further than the Donbas battlefields.

Ukraine now fields 250,000 active-duty soldiers—second only to Russia in terms manpower among European militaries. Moreover, Ukraine’s troops are battle-hardened after more than six years of constant combat against Russian forces in both conventional and hybrid warfare. No NATO country rivals Ukraine in terms of combat experience against the modern Russian military.

“For Ukraine, a sovereign state subjected to a multi-year campaign of ongoing Russian aggression, the stakes are high,” said James Gilmore, U.S. ambassador to the Organization for Security and Cooperation in Europe, during a Feb. 6 meeting in Vienna.

“The United States fully supports Ukraine’s sovereignty, independence, and territorial integrity within its internationally recognized borders, including its territorial waters,” Gilmore said. “We do not, nor will we ever, recognize Russia’s purported annexation of Crimea.”