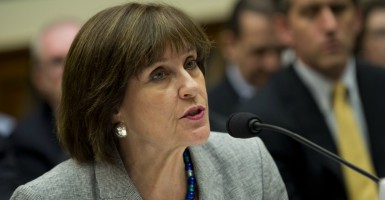 Obama’s Department of Justice may have been involved in the IRS scheme to target conservative non-profit organizations, according to newly-released documents obtained by Judicial Watch under the Freedom of Information Act.

The documents reveal that Lois Lerner met with attorneys from the Public Integrity Section (including its chief) of the Justice Department’s Criminal Division and a representative from the FBI in 2010 to discuss using campaign-finance laws to bring criminal charges against conservative non-profit organizations.

A memo prepared by Siri Buller, a tax law specialist who worked for Lerner, summarizing the meeting talks about the possibility of “a three-way partnership among the DOJ [Department of Justice], the FEC [Federal Election Commission], and the IRS” to “prevent prohibited activity by these [conservative] organizations.”  Of course, the problem is that the activities that Lerner thought were “prohibited,” like expressing opinions about Obamacare, were not prohibited.

Emails between IRS officials confirm that the IRS transmitted 21 disks containing 1.25 million pages of highly confidential tax information to the FBI. These pages included information from 2007-2010 regarding 113,000 tax returns of non-profit organizations.

The House Committee of Oversight and Government Reform was “astonished to learn…that these 21 disks contained confidential taxpayer information protected by federal law” that could not lawfully be turned over to the FBI without meeting very specific requirements for opening a criminal investigation of a particular taxpayer as outlined in 26 U.S.C. §6103. Those requirements were clearly not met by the FBI.

Judicial Watch President Tom Fitton notes “[t]hese new documents show that the Obama IRS scandal is also an Obama DOJ and FBI scandal … The FBI and Justice Department worked with Lois Lerner and the IRS to concoct some reason to put President Obama’s opponents in jail before his reelection. And this abuse resulted in the FBI’s illegally obtaining confidential taxpayer information.”

Not only did Lerner have friends in the Justice Department, it also seems she had allies in Wisconsin, where conservative non-profit groups were similarly targeted in a secret “John Doe” investigation for publicly supporting Gov. Scott Walker’s union reforms.

Recently obtained emails show that Lerner was in contact with Kevin Kennedy, director of the Wisconsin Government Accountability Board, who was one of the government officials behind the investigations of conservative organizations in Wisconsin such as the League of American Voters, Wisconsin Family Action, Wisconsin Manufacturers & Commerce and several others. Those emails show them “sharing articles on topics including greater donor disclosure,” which, as The Wall Street Journal points out, is significant “because those were the years when the IRS increased in harassment of conservative groups and Wisconsin prosecutors gathered information” that led to the John Doe “Star Chamber.”

Wisconsin Watchdog describes the state’s John Doe procedure as “a grand jury investigation, without a jury.” These investigations allowed law enforcement to conduct abusive, paramilitary-type raids on the leaders of a number of nonprofits and their families, most of which were conducted before dawn.

In one case, a 16-year-old boy was home alone very early one morning when armed law enforcement officers raided his home as if they were closing in on a dangerous drug cartel or mob operation. Though he was terrified, the officers would not allow him to call his parents.

Several other victims of these nighttime raids came forward, even though they were ordered not to speak about the investigations. The targets of these raids were not criminals—they were Wisconsin conservatives who had supported Act 10, the “Wisconsin Budget Repair Bill,” and whose reputations and livelihoods have been severely damaged as a result of these unwarranted, heavy-handed raids.

In January, a judge blocked subpoenas against the conservative targets of the John Doe investigations. In May, U.S. District Court Judge Rudolph Randa ordered that the investigations be shut down in their entirety because it was “unlawful” for the state to “target the plaintiffs for engaging in vigorous advocacy.”

These recent revelations suggest that the targeting of conservative non-profit organizations was a scheme that went far beyond the IRS and Lois Lerner alone. It was an effort that involved the coordination of several Obama administration executive agencies and supposedly non-partisan public servants.

With the discovery of the connection to the seemingly-unjustified, retaliatory investigations in Wisconsin, it seems Lerner’s efforts even extended beyond the federal government and into at least one state, threatening conservatives and chilling conservative speech at both the federal and state level.