Amid Impeachment, Pompeo Visit to Ukraine Underscores US Support 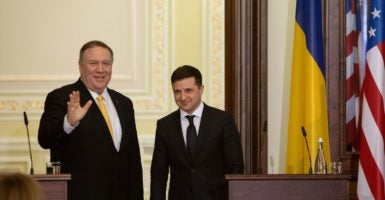 “The United States sees that the Ukrainian struggle for freedom, democracy, and prosperity is a valiant one. Our commitment to support it will not waver,” Pompeo said in a joint press conference Friday alongside Ukrainian President Volodymyr Zelenskyy.

Pompeo’s visit comes at a precarious moment for Ukraine on several fronts. Above all, the former Soviet republic has been embroiled in a low-intensity land war against Russian forces in its eastern Donbas region since early 2014—the same year that Russia invaded and seized the Ukrainian territory of Crimea.

American military backing has been invaluable to Ukraine’s war effort in the Donbas, as well as to deter further Russian aggression. And U.S. economic support and private sector investment are important for Ukraine’s economic recovery, following a sharp downturn in 2014 due to a significant loss of territory to Russia in the war.

For those reasons, Ukraine’s outsize role in ongoing impeachment proceedings against Trump cast doubt over the long-term durability of American military, economic, and diplomatic support at a key moment when fragile peace talks with Moscow are just beginning to bear fruit. In his visit to Kyiv, Pompeo sought to allay those concerns.

Pompeo’s trip also comes in the wake of a recent, testy exchange with a National Public Radio reporter in which the secretary of state allegedly asked her, “Do you think Americans care about Ukraine?”

Pompeo used his visit to Kyiv not only to congratulate Ukraine on its democratic progress, but also to emphasize the country’s overall importance to American interests.

“Of course, this isn’t my first time to Ukraine … It’s wonderful to be back and to watch the progress the great and valued people of Ukraine are making,” Pompeo said. “The Ukrainian people should know the United States understands that Ukraine is an important country. It’s not just the geographic heart of Europe. It’s a bulwark between freedom and authoritarianism in Eastern Europe.”

Zelenskyy called Pompeo’s visit a “hallmark” event and said he was “grateful” for America’s support.

“The relationship between Kyiv and Washington is invariably strong,” Zelenskyy said. “I would like to thank the United States of America, President Trump’s administration … and the entire people of the United States for the continuous support of Ukraine, our sovereignty, and territorial integrity. It is very important for us.”

House Democrats voted Dec. 18 to impeach Trump on charges of abuse of power and obstruction of Congress. They allege that Trump temporarily withheld $391 million in military aid to Ukraine last summer in a gambit to coerce Zelenskyy to launch investigations.

According to the official White House transcript of a July 25 phone call between Trump and Zelenskyy, Trump asked Zelenskyy to look into alleged Ukrainian interference in the 2016 U.S. presidential election as well as the business dealings of  former Vice President Joe Biden’s son, Hunter Biden, on the board of the Ukrainian energy company Burisma.

The younger Biden joined the board in 2014, when his father was President Barack Obama’s point man on Ukraine policy.

Trump and his Republican allies say the delayed delivery of military aid to Ukraine was due to the president’s concerns about corruption and ultimately had no negative impact on Ukraine’s national security.

Democrats also accuse Trump of withholding the possibility of a White House visit by Zelenskyy as a means to spur an investigation into Biden’s son, who left the Burisma board last year.

Regarding the possibility of a White House meeting with Trump, Zelenskyy said during the press conference with Pompeo that there is no precondition that he open an investigation.

The Ukrainian leader added, however, that a White House meeting would be useful only if both sides previously had agreed on policy deliverables. The implication was that Zelenskyy is looking for more than a photo op with the U.S. president.

The war in eastern Ukraine is a static, trench conflict fought along a roughly 250-mile front line in the Donbas region. Daily combat mostly features the exchange of artillery and sniper shots.

So far the war has killed nearly 14,000. On average, one Ukrainian soldier dies in combat every three days.

Since 2014, Ukraine has rebuilt its military into the second largest in Europe in terms of manpower. Today, the country is focused on building a military that can repel a full-blown Russian invasion and join NATO one day.

The temporary holdup in U.S. military aid did not hobble Ukraine’s war effort in the Donbas. Rather, the larger, long-term concern among some Ukrainian lawmakers is that amid the contentious impeachment process, American support for Ukraine—traditionally a matter of bipartisan accord—might become a politically charged issue.

In the joint press conference, Zelenskyy stressed the importance of continued bipartisan American support for Ukraine.

“I don’t think our friendly relations [have] been influenced by impeachment,” Zelenskyy said in response to a reporter’s question about the impact on U.S.-Ukraine relations of Trump’s impeachment by House Democrats and trial in the Senate.

“We are doing everything in our power to step up cooperation,” Zelenskyy said.

Zelenskyy emphasized the value of U.S. support in areas such as improving air defenses and helping Ukraine to stand up a shallow-water navy to defend its interests in the Sea of Azov and Black Sea.

“Ukraine is ready to develop new forms of partnership with the U.S.,” Zelenskyy said.

Zelenskyy, a former comedian with no previous political experience, swept into office last year in a landslide electoral victory.

Zelenskyy’s upstart Servant of the People political party later gained a majority in parliament, handing the new president a de facto mandate to carry out the two key planks of his election campaign platform—cleaning up corruption and ending the war in the Donbas.

Zelenskyy has made progress on the anti-corruption front. Notably, he satisfied certain reform benchmarks required by the International Monetary Fund to successfully secure a $5.5 billion loan.

The IMF loan was seen in many quarters as a tacit endorsement of  Zelenskyy’s reform agenda. It was also a key win as he looks to jump-start Ukraine’s economic growth.

When it comes to peace in the Donbas, the Ukrainian president also has made measurable progress.

In December, Zelenskyy and Russian President Vladimir Putin met in Paris for peace talks. It was the first meeting in three years for the so-called Normandy Format—a negotiating framework that dates back to 2014 to end the war in eastern Ukraine.

The Paris peace talks were a significant step toward a negotiated peace. At a minimum, the talks reopened channels of communication between Kyiv and Moscow through which trust can be slowly rebuilt, allowing incremental steps forward in hashing out compromises on controversial sticking points such as holding elections in the Donbas.

The talks also signaled that both sides were looking for a diplomatic solution to the war, rather than victory through decisive military action.

“We’ll maintain support for a diplomatic solution to the Russia-instigated conflict in east Ukraine and will maintain financial support for Ukraine,” Pompeo said. “We will never accept anything less than the full restoration of Ukraine’s control over its sovereign territory.”

The day was gray and cold and a mix of snow and rain was coming down as the trio laid wreaths at a memorial wall honoring soldiers killed in Ukraine’s ongoing war in the east. The panels of the wall display photographs of the fallen soldiers; the panel chosen for the wreath-laying commemorated combat deaths during the battle for Ilovaisk in August 2014.

The battle for Ilovaisk was the first major engagement of the war in which Russian regulars joined the fray en masse, thereby reversing a Ukrainian military advance against Russia’s original hybrid warfare operation. Hundreds of Ukrainian troops were killed and captured. The battle was the turning point after which the war became a conventional conflict.

After the wreath-laying ceremony, Pompeo met privately with Epiphaniy inside the St. Michael’s Cathedral compound.

A monastery has stood on this site since 1108, but the buildings there now are a careful reconstruction of what the Soviets demolished in 1937. The monastery was reopened officially in 1999, eight years after Ukraine’s independence following the breakup of the Soviet Union in 1991.

In 2018, the Ecumenical Patriarchate of Constantinople, historically the guiding body of the global Orthodox Church, confirmed plans to grant the Ukrainian Orthodox Church full independence, or autocephaly, removing it from control of the Russian Orthodox Church in Moscow for the first time since 1686.

Many Ukrainians see religious independence as a key step in their country’s ongoing cultural divorce from Russia.

“Russia should never stand in the way of the Ukrainian people’s fundamental right to exercise their religious freedom,” Pompeo said. “Ukrainians can count on American support in that regard.”