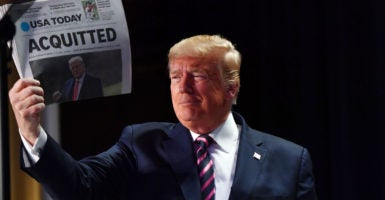 President Donald Trump didn’t let a prayerful audience stop him Thursday morning from calling political opponents who tried to remove him from office “dishonest and corrupt,” but he also didn’t accuse two major newspapers of running fake news on this particular day.

Coming to the stage before speaking at the National Prayer Breakfast—one day after the Senate voted mostly along party lines to acquit him in the impeachment trial—the president held up copies of The Washington Post and USA Today with their banner headlines.

The gesture prompted laughter from the audience.

In a 26-minute speech at the Washington Hilton hotel, Trump emphasized his administration’s work to protect religious freedom at home and abroad.

But the president also talked about the impeachment trial in which House Democrats accused him of abusing his power and obstructing Congress by connecting military aid to Ukraine with its agreement to investigate Democrats and election interference.

“My family, our great country, and your president have been put through a terrible ordeal by some very dishonest and corrupt people,” Trump said at the 68th annual bipartisan event.

“They have done everything possible to destroy us and by so doing, very badly hurt our nation. They know what they are doing is wrong, but they put themselves far ahead of our great country.”

It’s not easy to like someone “when they impeach you for nothing,”  Trump said.

“I’m working very hard for you, I will tell you, and sometimes you don’t make it easy and I certainly don’t make it very easy, and I will continue that tradition, if I might, this morning,” he told the audience.

“Weeks ago and again yesterday, courageous Republican politicians and leaders had the wisdom, fortitude, and strength to do what everyone knows was right,” the president said, referring to House and Senate lawmakers’ opposition to impeaching him.

All but one, of course, as Trump made a less than subtle poke at Sen. Mitt Romney, R-Utah, without mentioning his name.

Romney invoked God and his faith Wednesday when explaining why he would become the only Republican to vote for the article of impeachment accusing Trump of abuse of power.

“I don’t like people who use their faith as justification for doing what they know is wrong,” Trump said at the prayer breakfast. “Nor do I like people who say, ‘I pray for you,’ when they know that that’s not so. So many people have been hurt, and we can’t let that go on.”

The second half of the president’s comment seemed to be a shot at House Speaker Nancy Pelosi, D-Calif., who was sitting at the head table. Pelosi routinely has said that the impeachment process was a time to be “prayerful” and that she was praying for Trump even as she got behind the effort to impeach him in the House.

“In everything we do, we are creating a culture that protects freedom, and that includes religious freedom,” Trump said in his main remarks at the prayer breakfast, adding to bursts of applause:

To protect faith communities, I have taken historic action to defend religious liberty, including the constitutional right to pray in public schools.  …

I also recently took executive action to stop taxpayer dollars from going to colleges and universities that spread the poison of anti-Semitism and bad things about Christianity.

And we’re pursuing medical breakthroughs to save premature babies, because every child is a sacred gift from God.  …

And to give former prisoners a second chance at life, which so many people in this room have worked on for so long, we passed criminal justice reform into law, and I signed it nine months ago.

And it’s proving more and more that America is indeed a nation that believes in redemption. What’s happened with [former] prisoners is a miracle. …

Something which wasn’t done nearly enough—I could almost say wasn’t done at all—we are standing up for persecuted Christians and religious minorities all around the world—like nobody has ever done.

Religion in this country and religion all over the world—certain religions in particular—are under siege. We won’t let that happen. We are going to protect our religions.

Near the end of his remarks, Trump, who grew up as a Presbyterian, drew appreciative laughter and applause after expressing gratitude for the work of those in the room and “for the love they show to religion”:

Pelosi, who Tuesday night made a public spectacle of ripping up her copy of the president’s State of the Union address, spoke earlier at the prayer breakfast without addressing political developments.

“We pray that moral clarity of faith moves us to demand justice for those who are suffering and we pray that commercial interests never blind us to the ongoing human rights struggle fought by so many throughout the world,” Pelosi, a Catholic, told the audience.

Speaking later to reporters during her weekly press briefing, Pelosi said it was “inappropriate” for Trump to hold up the newspaper headlines and to get into partisan politics at the annual National Prayer Breakfast.

“He’s talking about things that he knows little about—faith and prayer,” she said of the president.