Some State Officials Want to Adopt Bernie-Style Health Care. Here’s What It Would Cost. 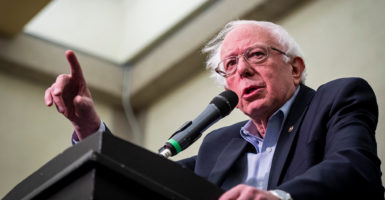 Sen. Bernie Sanders, I-Vt., has not let up in his push for single-payer health care—and some state legislators are matching his proposal.

Earlier this year, Sanders introduced a big and comprehensive “Medicare for All” proposal that would create a government-controlled health care system at the national level. The plan has gained momentum among Senate Democrats, but has also slammed into a fiscal reality check.

Three independent estimates from a diverse range of health care economists and policy analysts have highlighted the enormous additional cost of Sanders’ proposal. The liberal Urban Institute estimated that the 10-year costs would amount to a stunning $32 trillion, while the conservative Mercatus Center at George Mason University put the cost at $32.6 trillion.

Charles Blahous of the Mercatus Center said his own $32.6 trillion estimate made generous concessions for the purposes of calculation, and he accepted Sanders’ assumptions that the proposal would also generate savings, such as massive payment reductions to doctors and other medical professionals.

These independent assessments of “Medicare for All” are very much in line with assessments of state versions of the bill. The bottom line: These proposals will all cost taxpayers big money.

For example, the James Madison Institute in Florida found that if the state legislature enacted a state “single payer” program, it would have to increase its sales tax “from the current 6 percent to 39 percent to meet the increase in spending.”

A number of state budget officials have produced cost estimates for various state-based “single payer” proposals. For example, the Maryland Department of Legislative Affairs found that the enactment of a single-payer proposal in Maryland would cost Maryland taxpayers $24 billion per year. To put that into perspective, the Baltimore Sun points out that the total operating budget for Maryland is $44 billion.

In North Carolina, legislators sponsoring a single-payer bill withdrew it from consideration after the North Carolina General Assembly’s Fiscal Research Division found that the total cost of the proposal would hit $72 billion, of which the state would bear $41.9 billion in cost. As The News and Observer noted, that new financial obligation would “nearly double the current general fund budget.”

Officials in Sanders’ home state of Vermont tried to make their state the first in the nation to create a single-payer health care system. The ambitious proposal died after the costs were made known. According to an official state analysis, the proposal would have cost a total of $4.3 billion, with the state cost reaching $2.6 billion. As The Boston Globe noted, the entire Vermont budget in 2015 was just $4.9 billion. The state would have to increase the state personal income tax to 9.5 percent and add an 11.5 percent payroll tax.

Same problems with Colorado. Voters overwhelmingly rejected a Colorado ballot initiative to create a government-controlled health care system. That’s no surprise. According to an independent analysis, the proposed program, funded by an increase in state taxes, would still run an estimated deficit of $7.8 billion by 2028.

Even liberal California legislators have struggled to advance a single-payer program. Their proposal has stalled, lacking the necessary legislative support. Again, this was not surprising given the cost. A California State Senate report concluded that the cost would total $400 billion and the state would have to raise $200 billion in new taxes.

Liberal legislators in New York face similar problems. A joint study by RAND Corp. and the New York State Health Foundation found that to fund a New York single-payer system, the state would have to impose new taxes—$139 billion in 2022, and increasing to $210 billion by 2031.

As noted by the RAND Corp., “[U]nder the status quo, the state is expected to collect about $89 billion in taxes from all sources in 2022; thus, the new taxes would be a 156 percent increase in total state revenue.”

Slogans like “Medicare for All” might fit nicely on a bumper sticker or a T-shirt, but there is a lot more to serious policymaking. The sheer magnitude of the cost of a single-payer system—and the taxes required to finance it—should come as a sober warning to taxpayers: Under a single-payer model you’ll be paying more than you ever expected.