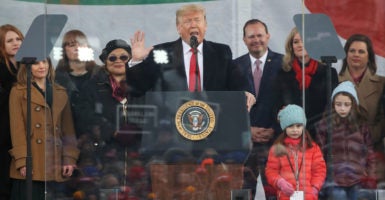 “I notified Congress that I would veto any legislation that weakens pro-life policies or encourages the destruction of human life,” President Donald Trump says Friday before a cheering crowd at the 47th annual March for Life in Washington. (Photo: Mark Wilson/Getty Images)

President Donald Trump made history Friday by becoming the first president to make an in-person address to the annual March for Life in Washington, where he asserted that he was the strongest advocate for the unborn ever to sit in the White House.

“Unborn children have never had a stronger defender in the White House,” Trump said to the cheering crowd.

The president outlined how his administration has prevented taxpayers’ money from paying for abortions, both in the U.S. and abroad.

“I reinstated and expanded the Mexico City policy and we issued a landmark pro-life rule to govern the use of Title X taxpayer funding,” Trump said.

“I notified Congress that I would veto any legislation that weakens pro-life policies or encourages the destruction of human life,” he said. “At the United Nations, I made clear that global bureaucrats have no business attacking the sovereignty of nations that protect innocent human life.”

Vice President Mike Pence previously has addressed the event in person, while Trump has delivered a streaming video message. This year, it was Pence who appeared by video and Trump who attended.

Trump’s remarks at the rally Friday came just before the opening of the fourth day of the Senate impeachment trial of the Democrat-controlled House’s charges that he abused his power and obstructed Congress.

Trump made an indirect reference to the impeachment effort in a short speech that often was interrupted by applause.

“They are coming after me because I am fighting for you, and we are fighting for those who have no voice. And we will win because we know how to win,” the president said.

With Sens. Mike Lee, R-Utah, and James Lankford, R-Okla., among those behind him onstage, Trump said the pro-life movement also knows how to win and has been winning for years.

Trump said Democratic lawmakers have taken a more extreme position on abortion than any “seen in this country for years and decades, and you could even say for centuries.”

“Nearly every top Democrat in Congress now supports taxpayer-funded abortion all the way up until the moment of birth,” Trump said, adding:

Last year, lawmakers in New York cheered with delight upon the passage of legislation that would allow the baby to be ripped from the mother’s womb right up until delivery. Then we had the case of the Democrat governor in the state of Virginia. … The governor stated he would execute a baby after birth.

Trump praised those in attendance for their activism.

“Young people are the heart of the March for Life. It is your generation that is making America a pro-family, pro-life country,” Trump said, adding:

The life movement is led by strong women, amazing faith leaders, and brave students who carry on the legacy of pioneers before us to raise the conscience of a nation and uphold the rights of our citizens. You embrace mothers with care and compassion. You are powered by prayer and motivated by pure, unselfish love.

Here is video of the president’s entire speech: