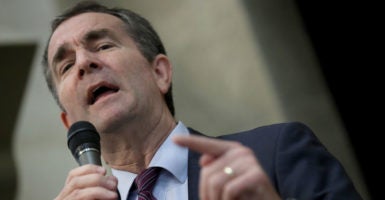 The Catholic bishop of the Diocese of Arlington in Virginia is condemning comments made by Virginia Gov. Ralph Northam, a Democrat, defending infanticide.

“In a staggering admission, Governor Northam stated that after an infant is delivered, the mother and the family should keep the baby comfortable, resuscitate the child ‘if that’s what the mother and the family desired,’ and ‘a discussion would ensue,’” Bishop Michael Francis Burbidge said in a statement released Thursday that Arlington parishioners said they received in their bulletins Sunday.

“This attitude—and the bill that was defeated this week—reflects a new level of deep-rooted animus against the inherent goodness of every child,” Burbidge added. “The governor’s statement and this bill demonstrate how far abortion advocates are willing to go in taking the life of a precious child.”

On Jan 30, Northam, a pediatric neurologist, defended a bill to legalize abortion right up to birth, sponsored by state Del. Kathy Tran, a Democrat, similar to a bill that was signed into law in New York on Jan. 22.

On Jan. 28, Virginia House of Delegates Majority Leader Todd Gilbert asked Tran, the Democrat who sponsored the Virginia abortion bill, how far her legislation would go.

It was during a Jan. 30 radio interview on WTOP that Northam defended the Virginia bill to legalize abortion right up to birth.

At a press conference on Jan. 31 addressing his controversial comments, Northam said, “We’re here to set the record straight. Virginia Democrats are on the side of ensuring women get the health care they need.”

Northam has also been caught up in a racism scandal, when The Virginian-Pilot published an article Friday reporting that his yearbook from medical school “shows him and another person in racist costumes—one wearing blackface and one wearing a Ku Klux Klan robe and hood, though it was not clear which person was the future governor.”

Burbidge said the church must be involved in combating such an acceptance of abortion.

“This is a critical moment in the life of our Church and our society,” he said, adding:

I call on the faithful and people of good will to advocate for the right to life of all people, including the unborn and those children whose lives are at risk even during the process of birth. In Virginia, with the assistance of the Virginia Catholic Conference, we must make our views known to our elected officials on all issues where the right to life is at stake.

Tran’s late-term abortion bill was defeated on Jan. 29 in a House subcommittee vote of 5-3.