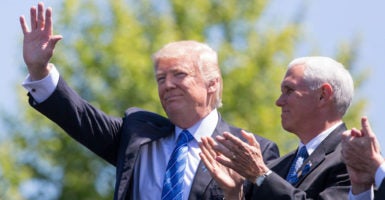 On Monday, the Trump administration announced the implementation of the “Protecting Life in Global Health Assistance” policy, which helps ensure that American taxpayers do not fund international organizations that perform or promote abortion overseas.

This program will expand the life-affirming Mexico City policy, which President Donald Trump reinstated during his first week in office.

That policy requires foreign nongovernmental organizations that receive United States Agency for International Development and State Department family planning assistance funds to certify that they will not perform or actively promote abortion as a method of family planning.

The Mexico City policy was first announced by President Ronald Reagan in 1984. Since then, the policy has been enforced by every Republican president and suspended by every Democratic president shortly after being inaugurated.

Trump’s January memorandum indicated that not only would he reinstate the Mexico City policy, he would strengthen it. The memorandum instructed the secretaries of state and health and human services to extend the policy to funds “furnished by all departments or agencies.”

The new Protecting Life in Global Health Assistance policy will do just that and apply to almost $9 billion in Department of State, USAID, and Department of Defense funds.

Importantly, the policy does not reduce funding for global health assistance.

Rather, it ensures that U.S. dollars are not entangled with the abortion industry and that American taxpayers do not subsidize nongovernmental organizations that do not respect innocent human life.

As previously explained at The Daily Signal, it is longstanding policy for the United States to prohibit funding for abortion in international programs:

The Helms Amendment, first added to the Foreign Assistance Act of 1961 and included in most annual foreign assistance appropriations since 1980, states that no U.S. taxpayer funds ‘may be used to pay for the performance of abortions as a method of family planning or to motivate or coerce any person to practice abortions.’ Similarly, the Siljander Amendment, also added to most foreign operations appropriations since 1982, states that no taxpayer funds ‘may be used to lobby for or against abortion.’

Protecting Life in Global Health Assistance will serve as a much-needed, complementary protection to policies like the Helms and Siljander amendments, because it will ensure that U.S. dollars are not entangled with the abortion industry either directly or indirectly.

The terms of the policy are simple: In order to be eligible to receive U.S. global health assistance, an organization must agree to not “perform or actively promote abortion as a method of family planning.”

The expanded Mexico City policy—now known as Protecting Life in Global Health Assistance—demonstrates a commitment to respecting “the dignity of human life from conception to natural, dignified death,” and will ensure that the United States supports global health programming in a manner consistent with fundamental, life-affirming principles.