Why I’m Going to the March for Life 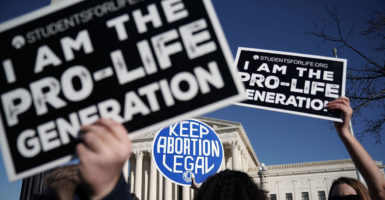 Nicolas Reynolds is finishing his senior year as an English major at Regent University. He has interned at Family Research Council, promoting legislation that protects and preserves the establishment of the family.

Last semester, I had the opportunity to take a class on Nazi Germany.

As someone who thoroughly appreciates history—and specifically 20th century history—I signed up without a second thought, sure an enlightening experience was in store.

A World War II buff—though not a scholar by any true definition—I was sure I would hear about Hitler’s military blunders, his cataclysmic defeats, and the consequential triumph of the Allies.

I was wrong. My mind was not animated by the Allies’ victory. Instead, I was weighed down by an atrocity that can never fully be understood: the Holocaust.

That’s why I’m participating in the March for life.

I had previously learned some about the heinous atrocities committed by the Nazis. But this time it was different: I learned of the barbarism which was propagated and enforced by Hitler’s Germany.

This material didn’t chalk up the horrors to distant, radical ideologies that now lay safely within the confines of bound books. It presented the Holocaust up close and personal—as an atrocity carried out by ordinary men.

We don’t like that—and I didn’t like it. If ordinary men could have done this, then I could have done it. These men exchanged their innocence for cultural acceptance, reputation, and well-being.

Would we have chosen better?

We don’t like it because it places ourselves in the shoes of those who committed such atrocities. We don’t like it, but that is the reality—it will be a stain on our nation’s history that we allowed it to be legal to end the lives of innocent unborn babies.

Though the Holocaust was horrific beyond words, it was intentionally calculated, strategically conducted, and judiciously justified by a host of highly educated men—most of whom had earned their terminal degree.

If one can justify the mass murder of a specific people group, what is sacred? Who is safe? Is there a limit to the evil the human heart can commit?

Confronted by the magnitude of this thought, I turned to ask about the sins of my own culture that are going unchecked.

I have always firmly held pro-life convictions. I have always believed no right could be more precious than one’s fundamental right to life. But it is the conviction that I cannot stand idly by that prompts me to attend this year’s March for Life.

No more do I find a clean conscience merely claiming to be pro-life. No more do I wish to emulate those who opposed the systematic extermination of the Jews, yet were not sufficiently moved by the smoke and ashes of Auschwitz and Treblinka.

We march to be seen. Yet, we also do not march to be seen. When it comes to acting on behalf of those who have no voice and cannot act, we must do the right things chiefly because they are right—because we would rather live with social rejection than bear a guilty conscience.

Terrence Malick’s recent film “A Hidden Life” presents the true story of an unsung hero of World War II, the Austrian farmer Franz Jägerstätter. When called on to serve in Hitler’s army, he refused to swear allegiance to Hitler.

The cost was high for him: separation from his loving wife, his beloved children, and ultimately, the loss of his own life. He was executed by the Nazi government on Aug. 9, 1943.

Jägerstätter loved his wife and children dearly. But only one thing dictated the choices that determined his fate: his commitment to what is right and true.

Let us be known as a people who contend for truth and prize it above all other pursuits in this world. We can stand for what is right. We do not have to join in with the thoughtless and selfish sins of our culture.

We cannot stand aside in ignorance, nor aid in the defilement of the unborn. We can and must stand for what is right, because it is right.