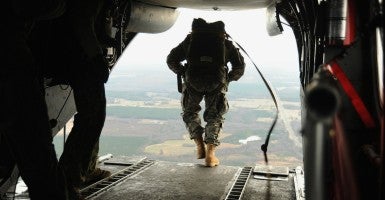 President Barack Obama is misusing our most elite forces.

Since the onset of the fight against the Islamic State (ISIS), The Heritage Foundation has called for a greater use of American Special Operations Forces (SOF). This includes Navy SEALs and Army Rangers.

Special Operations Forces are designed to conduct high-end politically charged warfare, and to execute better than anyone in the world (which is what we need against ISIS).

It seems that Obama has finally stated to heed this call. So what’s the problem now?

The administration has ramped up the use of Special Operations Forces, but they have neglected to adjust another critical aspect of the approach Heritage’s analysts have recommended.

This is the utilization of a much more robust air campaign to go with the elite forces on the ground. Special Operations Forces are able to be force multipliers—low numbers in the fight, but big results—because they can provide targets to aircraft, advise on the correct mix of munitions, guide the ordinance to the specific targets, and provide accurate bomb damage assessment.

These skills will only have an effect if there had been an orders of magnitude increase in the numbers of airstrikes involved.

Presently, coalition forces (almost all American) are making one to two dozen sorties a day against ISIS. To a civilian, that may seem like a lot. Trust me: It is not. In previous air campaigns, the numbers were in the hundreds.

Additionally, a sortie means a plane takes off, flies to the target area, and returns. If one looks closely, nearly 70 percent of the sorties are returning with their ordnance still on the plane. They do not drop the bombs.

This can be attributed to the ridiculously restrictive rules of engagement imposed by the White House leadership. While there are always going to be missions that get waved off to protect against inordinate civilian casualties, strikes against ISIS are not occurring because they don’t want to spill oil on the sand (no negative environmental effects).

That is ineffectual and unnecessary.

Another development has come to light showcasing the misuse of our special operations assets. It seems that the command in Iraq has been providing Russia the exact locations of American special operations units operating in Syria.

The reason for this breach of operations security? So the Russians will not inadvertently target them with airstrikes.

To some this may seem prudent, and it would be if Russia were an ally. They are not. Russia and its proxy the Assad regime are striving to find and kill the exact units our special operations units are training and advising. Does anyone think the information given to the Russians will not be used to crush the very forces our people are supporting?

If the Obama administration wants to protect American soldiers from possible Russian air attacks, it needs to step up and tell the Russians that the U.S. will not allow Russia to fly at all in the northern and western parts of Syria, under threat of retaliation. The Russians will understand that sort of “force protection.”

Frankly, even if the Obama administration did do this, it is no longer clear that this sort of response will be enough to stop ISIS.

The dribble of military “antibiotic” used so far may only have built a “super virus” that cannot be stopped by anything but a much larger response.

Exactly what Obama fears most may be what he has created.