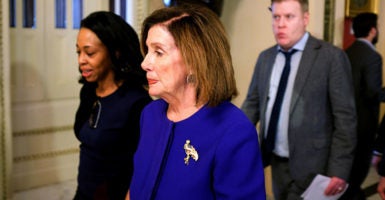 House Speaker Nancy Pelosi, D-Calif., walks to the House floor Thursday during debate on a resolution critical of President Donald Trump's order that resulted in a drone strike killing a top Iranian military figure regarded as a terrorist by the U.S. (Photo: Alex Wroblewski/Getty Images)

The Democrat-controlled House approved a resolution late Thursday aimed at reining in President Donald Trump’s future actions on Iran and condemning him for not notifying Congress before last week’s drone strike that killed an Iranian terrorist leader who was one of the country’s most senior officials.

The House adopted the resolution 224 to 194, with three Republicans—Reps. Matt Gaetz and Francis Rooney of Florida and Rep. Thomas Massie of Kentucky—supporting it and eight Democrats opposed.

Rep. Justin Amash of Michigan, a Republican-turned-independent, voted for the symbolic resolution.

“When I first heard from the administration, the secretary of defense and chairman of the Joint Chiefs, I said, ‘Why did you not consult Congress?’” Pelosi said. “They said, ‘Because we had to keep this close.’ You had to keep it close from the ‘Gang of Eight,’ the leadership of Congress?”

The “Gang of Eight” comprises the House speaker and House minority leader, Senate majority and minority leaders, and the chairmen and ranking members of the House and Senate Intelligence committees.

The House Democrats who voted against the resolution were Ben McAdams of Utah, Joe Cunningham of South Carolina, Elaine Luria of Virginia, Kendra Horn of Oklahoma, Stephanie Murphy of Florida, Josh Gottheimer of New Jersey, and Max Rose and Anthony Brindisi of New York.

The House adopted the measure as a concurrent resolution, which means it’s nonbinding and will not be forwarded to the Senate or president—who would be unlikely to sign it anyway—and does not carry the force of law. Rather, it’s a statement by the House against the administration’s action.

The nonbinding resolution was sponsored by freshman Rep. Elissa Slotkin, D-Mich., who has a background with the CIA and the Defense Department.

Sen. Tim Kaine, D-Va., introduced companion legislation in the Senate. The Senate is controlled by Republicans, where it is unlikely to get a vote.

The War Powers Act is a 1973 law that obligates the president to provide notification to Congress about a military action within 48 hours and gives Congress limited ability to prohibit further action.

During the House floor debate, Trump retweeted former national security adviser John Bolton’s criticism of the War Powers Act, saying he agreed that the law was unconstitutional and should be repealed.

Earlier Thursday, in remarks at the White House, Trump defended the decision to kill Suleimani.

Rep. Mark Meadows, R-N.C., noted that the administration took action to kill a dangerous terrorist, and criticized the Democrats who are attacking him for it.

“I never thought that I would hear, on this House floor, an apology to the Iranian people for an action that we took that was justified, taking out a terrorist,” he said.

The North Carolina lawmaker noted the carnage caused by the Iranian general killed in the strike:

We have a gentleman who gave his legs in service to this country, and yet we are apologizing to the Iranians with a nonbinding resolution that is nothing more than a press release.

It has no effect. It doesn’t do anything. … All they are doing is trying to get a press release to keep them from having a primary opponent.

This is a sad, sad day. Yet here we are, having another speech to try to take on the president of the United States for actually taking out a terrorist.

I would ask my colleagues the opposite. How many Americans does a terrorist have to kill before they join with us? Is 600 not enough? Does it have to be 1,000, or 10,000? A million?

At some point, we have to stand up and let the long arm of justice go in and take out these terrorists.

In retaliation for the strike that killed Suleimani, Iran launched missiles at two U.S. military facilities in Iraq early Wednesday local time, but there were no casualties or major damage.

Trump announced later Wednesday that he would be imposing more sanctions on Iran in response to the attack.

This report has been updated since publication to specify which lawmakers crossed party lines on the resolution.