Prosperity and Freedom All Hinge on the Rule of Law 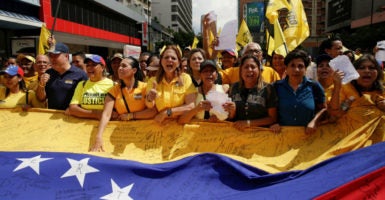 Jackson Ventrella is a member of the Young Leader's Program at The Heritage Foundation.

Unfortunately, there are several troubling trends in Latin America.

Latin American countries with the largest declines in their freedom score over the last decade include Venezuela, Nicaragua, Honduras, Ecuador, and the Dominican Republic. Nicaragua and Venezuela were also among the greatest losers in freedom just in the past year.

For the first time ever, Venezuela joined the likes of Russia, China, and a host of African nations in the ranks of countries listed as not free.

To thank for this, they have President Nicolás Maduro and his stubbornness in continuing socialist policies similar to those of Hugo Chávez. Chávez’s authoritarian regime left a sobering legacy that has left the Venezuelan people hungry not only for freedom, but for everyday food.

The common thread that defines the more authoritarian regimes of Latin and Central America is their lack of adherence to the rule of law.

For example, Nicaragua has an exceptionally corrupt government, with President Daniel Ortega and the Sandinista Party controlling all the minute details of government. In the most recent Nicaraguan election, Ortega’s ticket featured his wife as his running mate, and the two won handily with 75 percent of the electorate—though opposition leaders claimed it was a fraudulent election.

The rule of law can and will survive turbulent conditions, but Ortega has never given it a chance.

The fight for freedom in Latin America is far from over.

Just beyond our southern border, the threat of an Andrés Manuel López Obrador presidency in Mexio has begun to manifest. His proposed policies are of the extreme left and would point toward a Mexico in the mold of Chávez’s and Maduro’s Venezuela.

Despite the decline in good governance in Latin America, not all hope is lost. With U.S. support of democratic forces in places like Venezuela, the fight for freedom will continue.

Edwin J. Feulner, the founder of The Heritage Foundation, describes the battle for freedom perfectly: “In Washington, there are no permanent victories or permanent defeats, just permanent battles.”

The same can be said for countries in Latin America. Vigilance will win freedom and will allow it to endure.

The battle for freedom boils down to a choice between liberty and corruption.

Despots like Maduro and Ortega have chosen corruptive policies rather than liberty-oriented policies. As a result, their respective countries do not share in the blessings of freedom enjoyed by nations that have chosen liberty.

If we want policies aimed at freedom to gain ground in Latin America, the rule of law needs to take root. People all across the world see the unprecedented prosperity and freedom that Americans enjoy, and they also see the causes.

Human flourishing requires freedom, and freedom requires a deeply rooted respect for the rule of law.