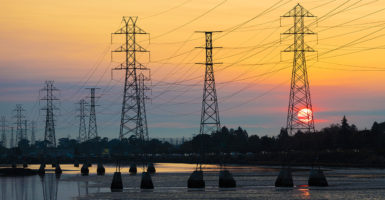 California is often held up as a bastion of progressivism and equality.

However, the reality is that the state is increasingly becoming a place only for the very rich and very poor, with little in between.

The latest wildfires and power blackouts in California are—like so many of the state’s bad public policies—putting the hurt on the state’s beleaguered middle class.

While there are certainly problems facing other states across the nation, California’s dysfunction comes into sharp focus because of its huge population, prestige, and insistence on being a progressive standard-bearer.

Businesses, especially supermarkets and others that sell and use perishable goods, are taking a sizable hit to their bottom lines.

According to a report by KRON-TV Channel 4 in San Francisco, a small, family-owned supermarket in San Rafael estimated that it lost $200,000 due to a recent power shutoff in Marin County. For many small businesses, which often run on very tight margins, those sorts of losses can be devastating.

And the total cost to the state will likely be in the billions of dollars. Even for an economic giant like California, that’s unsustainable.

Businesses already have to deal with a challenging tax and regulatory environment in California. But for those that sustain massive losses every time the power shuts off—which could become a frequent event now, unless a dramatic change in policies occurs quickly—the cost of doing business there may just be too much.

Of course, the powers that be in California are trying to shift the blame for this politician-made, preventable disaster onto climate change, corporate “greed,” and President Donald Trump.

USA Today reported that California Gov. Gavin Newsom, a Democrat, said the whole mess was “not a climate change story as much as a story about greed and mismanagement over the course of decades. … Neglect. A desire to advance not public safety, but profits.”

The fact is, it was the state’s overwhelming desire to go green that pushed PG&E, a powerful state utility with a government-backed monopoly, to skimp on safety and measures that could have lessened fire risks.

Additionally, Trump is correct to point out that environmentalism and poor land management have played a huge role in making California, which has historically had a hot, dry fire season, a tinderbox ready to ignite.

PG&E, with the blessing of the governor-appointed and legislature-approved California Public Utilities Commission, is allowed to mandate power shut-offs at the peak of fire season to limit the damage to the state, which bankrupted the utility in January.

The current proposals to rectify the situation—like having the state take over PG&E—would only make things worse, especially for the middle class.

As The Wall Street Journal noted about plans for a state takeover of PG&E:

Democrats are accusing PG&E of putting profits over safety, but the utilities commission approves its return on equity based on what’s needed to attract private investment. Utility shareholders are typically older folks who rely on dividends for a reliable stream of income—not billionaire hedge funds.

Older, middle-class Californians will lose their investments, and the cost of energy will necessarily skyrocket.

Add it all up, and the future of the Golden State is looking quite dark.

California already has some of the highest gasoline prices in the nation, an absurd cost of living and housing (which has driven many to flee to the rural areas with high fire risks), exploding homelessness and crime, and a one-party political system that offers no real alternatives.

Even the concept of citizenship is breaking down, with absurd laws now allowing illegal immigrants serve on government boards and commissions, leaving little reason for many to be invested in the state’s future.

With this additional blow during fire season—which is crushing businesses, and making many Californians feel like they are living in a Third World country—there will be even more pressure on the middle class to pull up stakes and leave.

That’s hardly a good sign for a sustainable future.

“The state’s elite took revolving-door entries and exits for granted,” wrote historian Victor Davis Hanson, a California native. “They assumed that California was so naturally rich, beautiful, and well-endowed that there would always be thousands of newcomers who would queue up for the weather, the shore, the mountains, and the hip culture.”

But now California “is nearing the logical limits of progressive adventurism in policy and politics,” Hanson wrote.

California, a state that once set the standards for prosperity and the American dream for the rest of the country, will be little more than a dire warning of how economic blessings can be squandered in a generation.