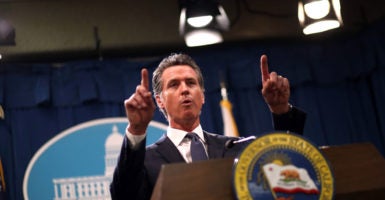 California—a one-party state dominated by progressives—has become the model for where progressivism will go when completely unchecked.

Now, even the basic concept of citizenship is under full-blown assault as the state has moved on from being a “sanctuary state” for illegal immigrants to outright insisting that noncitizens have the same access to the levers of power as citizens.

California Gov. Gavin Newsom recently signed legislation that would allow illegal immigrants to serve on government boards and commissions. He also signed another bill that would make it illegal to make immigration-related arrests at courthouses.

The law allowing illegal immigrants to serve on boards and commissions will have all kinds of complications in implementation. If exercised, it could run afoul of federal laws and would certainly attract the attention of Immigration and Customs Enforcement.

The bottom line, though, is that it’s an absurd piece of legislation coming from an absurd state that is squandering the benefits of its naturally advantageous climate.

Combine this with the fact that the powers that be in the state outright encourage people to break our country’s laws, and it demonstrates how far California is drifting from a nation of “we, the people of the United States.”

Newsom, of course, called this blatant disregard for federal law a sign of “respect” to immigrants.

“Our state doesn’t succeed in spite of our diversity. Our state succeeds because of it,” Newsom said in a statement about the bill. “While [President Donald] Trump attacks and disparages immigrants, California is working to ensure that every resident—regardless of immigration status—is given respect and the opportunity to contribute.”

It’s actually a sign of tremendous disrespect to new immigrants who have dutifully and painstakingly followed the law to earn their citizenship and be welcomed as equal citizens of a free country.

Simply put, the latest effort to grant noncitizens representative power in our country is a war on democracy—a word that many on the left have watered down to stand for little more than “good things I like.”

Pure democracy, in which every issue is at the whim of bare majorities, is the bane of liberty, but a free society still ultimately must be based on the consent of the governed. This was the foundation of our republican system of constitutional government, where institutions were put in place to both empower and check the will of the people.

California’s new immigration laws make a mockery of democracy and citizenship. Our Constitution does not begin with the lines, “We the people of the United States … and everyone else … .”

With citizenship come rights and responsibilities. It’s every bit as ridiculous to suggest that a noncitizen can participate in American government as it is to suggest that citizens of other nations can be forced into jury duty here or to serve in our military.

As middle-class Americans flee the dysfunction of California, it’s worth asking: Is the state actively hostile to the interests of its own legal residents?

California has crushingly high taxes and spends lavishly, but gets little out of it as the infrastructure erodes, and pipe-dream projects, such as the bullet train, act as little more than money pits.

Increasingly, to thrive in the Golden State one must be wealthy and connected or dependent on government largesse to eke out a living.

By reducing the idea of citizenship to the point of meaninglessness, California is signaling that one would be a fool to invest in its future, to be part of a larger community that works to ensure the blessings of liberty not only for themselves, but for posterity.

As Victor Davis Hanson, a Californian and historian, correctly observed, the California government—completely saturated with the progressive worldview—has become both dysfunctional and predatory. Hanson wrote:

Those who administer California’s plagued Department of Motor Vehicles and high-speed rail authority may often be inept and dysfunctional, but the state’s tax collectors are the most obsessive bureaucrats in the nation.

It’s the dawn of a dark age in California, indeed.