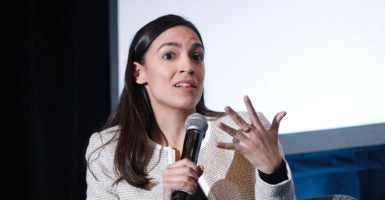 Is America a democracy or a republic?

This debate, if you can call it that, was launched on Twitter by two freshmen lawmakers, Reps. Alexandria Ocasio-Cortez, D-N.Y., and Dan Crenshaw, R-Texas.

Crenshaw noted on Twitter that the Electoral College prevents pure democracy, and that’s a good thing.

Ocasio-Cortez said a few days later that, essentially, the mask has slipped and Republicans and conservatives have revealed that they want to end democracy.

Debating the terminology of how we define ourselves is perhaps less instructive than the larger focus on what institutions actually have made us free and successful.

There is a strange assumption from some that democracy simply means “good things I like.” Therefore, “more” democracy—however that is defined—is inherently better than less.

This leads to absurdities like slapping “democratic” in front of socialism to reframe socialism as something other than the failed ideology that it is.

Ultimately, socialism and fascism have been mostly democratic expressions of the popular will, or “general will,” as French philosopher Jean-Jacques Rousseau would put it.

But these political ideologies, taken to their logical extent—with the eventual diminishment of individual rights and checks on power—end in tyranny.

Socialism in Venezuela came about democratically, after all.

This isn’t to say that the inclusion of democracy in a political system is inherently bad. After all, a cornerstone of the American system is the idea that the people—not kings or dictators—are sovereign, and that they shall rule.

But for the people to rule effectively, pure democracy must be curtailed.

Democracy can be nimble and responsive to changing circumstances, but also fickle and ruthless—little more than mob rule in its unrestrained form.

Majority rule must be balanced by putting the brakes on majority tyranny. These brakes are apparent all throughout our system.

And this is why the Electoral College—which today is actually fairly democratic—is such an important institution for a vast and diverse country like the United States.

Advocates of abolishing the Electoral College insist that anything other than a measure of the national popular vote is unfair in how we choose presidents. But not a single other office, law, or policy in this country is decided in this way.

Senators represent vastly different numbers of people, based on the state they come from. The House of Representatives is selected on a district-by-district basis. Local politics determine national laws.

The Supreme Court is highly undemocratic, with several layers of distance between any sort of democratic process and appointment of justices by the president and confirmation by the Senate.

The Electoral College’s state-based system ensures that political candidates must appeal to a wide variety of Americans.

Yes, some Democrats get frustrated by the fact that racking up vote totals in some of the largest blue states can’t secure victory in presidential elections, but that is no reason to change an electoral process that has succeeded for over two centuries.

The Founding Fathers had differing views about what level of democracy was exactly right for our large and growing republic. Most held a deep skepticism, however, about implementing any kind of pure democracy without constraints.

“It is in vain to say that democracy is less vain, less proud, less selfish, less ambitious, or less avaricious than aristocracy or monarchy,” John Adams wrote to his friend, John Taylor.

Adams here provides a keen insight into human nature. Unchecked power has always been the bane of liberty, whether in the hands of “good” people or “bad.”

The framers of the Constitution wanted American institutions to be stable and enduring; responsive to changing circumstances, yet immune to the wild mood swings of pure democracy that put societies in a state of perpetual revolution.

It doesn’t take long to understand that some of the best parts of our political system—like the First Amendment that protects the freedoms of speech and the press—are deeply anti-democratic.

And these elements of our constitutional republic are rightly celebrated as key components of American success and exceptionalism.

The bottom line is, the U.S. political system is a unique blend of ideas that includes an important, but limited, place for democracy.

Democracy alone doesn’t produce freedom or prosperity, and it is certainly not an unqualified good.