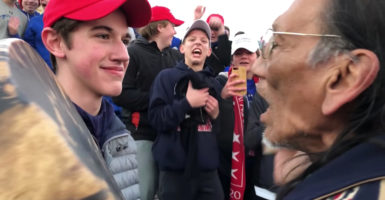 In the shallow world of modernity, we throw around a word like “democracy” as a stand-in for “things that I like.”

Many in popular culture and elite institutions promote democracy as a cure for all that ails us—an unquestioned and unqualified blessing.

Still others turn on a dime and hope for its demise as soon as it produces outcomes they don’t like.

While democracy often plays a good and necessary role in a self-governing society, we have lost the healthy skepticism of its worst excesses that the Founding Fathers understood when they established the governing institutions of the United States.

These excesses were on full display over the weekend.

The frenzied hate mob unleashed on Catholic, “Make America Great Again” hat-wearing teens—falsely accused of harassing a Native American at the March for Life over the weekend—is a shameful reminder of how fake news can destroy lives and perpetuate evil.

Particularly disturbing is how so many people—celebrities, politicians, and even some respected leaders who should have been more wary of grabbing their pitchforks before the facts had been unveiled—fell in with the scramble to condemn the students as hateful racists.

Many of these voices called for violence and other heinous actions against the children from Covington Catholic High School in Kentucky. There could be no quarter, no forgiveness, no mercy. The mob needed its pound of flesh.

Celebrities and so-called thought leaders spun out articles and social media posts comparing the Covington Catholic students to segregationists and Ku Klux Klansman, condemning the Catholic Church for a “shameful history of Native American abuses,” and even angrily claiming that smirks and smiles are actually racist.

The story was just too good to fact check, too easy to force into a cherished narrative: that white, male Christians are unleashing violence, bigotry, and harassment on minorities all over America.

The problem is, the entire narrative was based on a wild distortion of what occurred.

The vicious and often unhinged diatribes we saw launched against the Covington Catholic students laid bare an irrational rage burning beneath the rule of law.

It is no stretch to think that left unchecked, the mob—especially the rage-fueled left—would have unjustly stripped these students of their basic freedoms and abandoned the notion of a presumption of innocence in a rush to judgment.

This is the same pattern we saw transpire in the confirmation battle over Supreme Court Justice Brett Kavanaugh.

So, is the problem our reckless and agenda-driven media? Yes, in part.

Media coverage of this incident was dreadful and shameful—a confirmation for many that even America’s most established and influential media institutions have become hopelessly biased and reckless in the age of Trump.

But the problem goes deeper than that. The truth is, fake news was every bit as much a problem in the late 1700s, when our country was formed, as it is today.

The use of the printing press allowed knowledge to travel like wildfire, but also gave hucksters and falsehood peddlers a new tool for spreading their wares more effectively.

True, our news today travels much faster, and social media can spread hysteria like a virus. But there’s also an upside.

Public intellectuals and members of the media continually decry the decentralized nature of the internet and its ability to generate “fake news” and misleading stories. They long for the day when America had just a few big outlets acting as responsible news arbiters.

Some even suggest that the answer is to create government agencies to sort through this information and tell us what the truth is, such as what Europe is experimenting with.

This is a terrible way to address the issue.

It was legacy media outlets in the first place—like The New York Times, The Washington Post, and CNN—that perpetuated the deceptive reporting we witnessed over the weekend and failed to follow basic journalistic practices, such as inquiring about both sides of a heated dispute.

News outlets point to foreign agents and anonymous Twitter accounts that promoted a slanted view of the controversy, but they are just using them as scapegoats. Their own journalistic malpractice is the heart of the problem.

This wouldn’t be the first time these outlets got a story massively wrong and deceived the American people, but now we at least have greater means to debunk falsehoods when they arise.

It was the skeptics who took the time to study the story from all angles, like Robby Soave at Reason, who blew the story up. Soave reviewed footage from the hours of amateur video taken of the incident. While legacy media outlets were still peddling the initial, deceptive narrative, it was collapsing with a simple review of easily obtainable evidence that refuted it.

As my colleague, Kelsey Harkness, noted on “Fox & Friends”: “Just imagine if there were no hourlong, or two-hourlong videos that could exonerate these high school boys. Their lives could be ruined.”

The Dangerous Whims of Democracy

If anything, we need to learn a valuable lesson from this incident.

We should today heed the wisdom of John Adams, who wrote to his friend John Taylor about the excesses of democracy.

This lesson is especially important now as it’s clear that many—especially on the left—have deep and unrelenting contempt for their fellow citizens who disagree with them. He explained that while democracy is no worse than “monarchy or aristocracy,” it is often bloodier than either and “wastes, exhausts, and murders itself.”

Pure democracies devour themselves, Adams wrote, as citizens turn against citizens. “It is in vain to say that democracy is less vain, less proud, less selfish, less ambitious, or less avaricious than aristocracy or monarchy.”

The failures of democracy are the result of the fallen nature of man—a condition that cannot be cured and cannot be changed.

This is why the framers of the Constitution formed our federal republic with a complex web of checks on power.

Democracy had its place—most specifically in the frequent elections of the House of Representatives—but it was removed from decisions dealing with fundamental rights, such as free speech and the right to bear arms enshrined in the First and Second Amendments.

This is the balance the Founders sought to preserve our freedom, and in many cases, save us from ourselves.

The framers designed our system to slow down decision-making—especially at the highest, federal level—to frustrate the ambition of the leaders who represent us, to throw water on the temporary, to excite passions of the people, which may lead the country to folly or tyranny.

These concepts may be lost on progressives and those on the left who believe in the evolution or perfectibility of man (which seems untenable given that they see a potential fascist in everyone who disagrees with them).

But the Founders likely wouldn’t have been surprised by the noxious media frenzy that set out to destroy a few high school students in the name of social justice.

The Founders well understood the threat of fake news. They wisely assessed that despite the threat, the government could not be a trusted arbiter of what is real and fake—so they created the First Amendment.

Then, knowing that this judgment of truth and falsehood could be left only to the people in a free society, they put guardrails on the people themselves so that they could not use this power to tyrannize their fellow citizens on a whim.

This is the genius of America. This is why we have the world’s oldest republic.

The Founders may not have known us, but they knew history, and they themselves. They knew that unrestrained democracy would lead to a destruction of all freedom, the annihilation of God-given individual rights that governments of all types had trampled throughout human history.

In an age in which contempt for fellow citizens is reaching pathological levels, we can be thankful that these institutions exist to protect us.

Yet given the retreat of constitutional government over the past century, we have less cause for certainty that they will continue to save us from ourselves.