Most of Government’s Own Watchdogs Say They’re Stonewalled 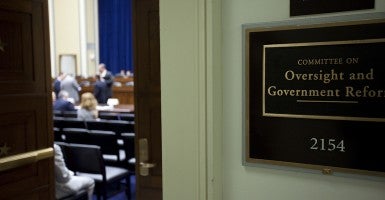 More than half of the federal government’s inspectors general have joined to lodge a formal complaint that the Obama administration places “serious limitations” on their ability to uncover waste, fraud, and abuse.

A total of 47 of the 73 government watchdogs sent the unprecedented letter to leaders of two congressional committees, Fox News reported.

In their complaint, the inspectors general say:

Agency actions that limit, condition, or delay access thus have profoundly negative consequences for our work: they make us less effective, encourage other agencies to take similar actions in the future, and erode the morale of the dedicated professionals that make up our staffs.

They call on the oversight leaders to reaffirm the commitment of Congress to helping IGs combat waste, fraud, and abuse, and to exert “all available powers to enforce” access to agencies that refuse to comply.

Government bureaus, the IGs write, typically prevented them from obtaining relevant information by calling it “privileged.” These restrictions, they add, risk “leaving the agencies insulated from scrutiny and unacceptably vulnerable to mismanagement and misconduct — the very problems that our offices were established to review and that the American people expect us to be able to address.”

Hans von Spakovsky, senior legal fellow at The Heritage Foundation, told The Daily Signal that the IGs’ letter is both unprecedented and telling:

This unprecedented complaint by a majority of the federal government’s inspectors general that the Obama administration is obstructing their ability to investigate corruption shows just how far the administration is willing to go to hide its wrongdoing.

The IGs describe three specific instances in which government agencies would not give them access to records and other information needed to do their oversight work properly:

In a statement to Fox News, a Peace Corps spokeswoman reaffirmed the agency’s commitment to “working with the inspector general to ensure rigorous oversight while protecting the confidentiality and privacy of volunteers who are sexually assaulted.”

DOJ spokesman Brian Fallon told Fox that the inspector general received all information requested, but that “because the documents at issue included grand jury material, credit reports, and other information whose dissemination is restricted by law, it was necessary to identify exceptions to the law to accommodate the inspector general’s request.”

If there is anyone who should have transparency [from the government], it should be the watchdogs inside the government working for the president.

Because many IG reports and activities are not public until their completion, Issa said, “some of the best examples of obstruction probably are the ones the IGs don’t want to say in a public format.”

Inspectors general for both the IRS and the Export-Import Bank agencies signed the letter.

Von Spakovsky,  co-author of a book about Attorney General Eric Holder’s Justice Department, said the allegations by the agency’s inspector general are notable. He told The Daily Signal:

The complaint by the Justice Department’s IG is particularly concerning and very revealing. Eric Holder has no hesitation in abusing his power to prevent the public from finding out about the rank politicization of justice and the attorney general’s corrupt exploitation of his authority as the chief law enforcement officer of the United States.

In the wake of the Watergate scandal, Congress in 1978 passed the Inspector General Act establishing the initial 12 IG offices. The law stipulates that each official watchdog has “complete, unfiltered, and timely access to all information and materials available to the agency that relate to that inspector general’s oversight activities, without unreasonable administrative burdens,” the letter to the congressional committees states.

Issa, saying “there has never been a letter even with a dozen IGs complaining,” called the letter unprecedented. He added:

This is the majority of all inspectors general saying not just in the examples they gave, but government wide, they see a pattern that is making them unable to do their job.

The Oversight Committee chairman said he intends to hold hearings to delve into issues raised by the IGs’ letter when lawmakers return to Washington in September.