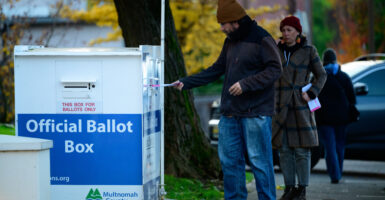 Republicans should not accede to making what were supposed to be temporary, but fraud-prone, accommodations in voting for COVID-19, such as drop boxes, a permanent part of the country's electoral landscape, as Democrats want to do. (Photo: Mathieu Lewis-Rolland/Getty Images)

The white flags of surrender are flapping in the breeze, thanks to Republicans willing to accept as permanent the “emergency” election rules that Democrats demanded during 2020’s COVID hell.

Longing for the elusive red wave, some GOP officials and operatives now suffer Stockholm Syndrome: They think it’s time to surrender to Democrats, swallow their dodgy vote schemes, and eventually sink them with early, mail-in, and trafficked ballots, drop boxes, and ballots received and counted days and weeks after polls close, etc.

Rather than switch, Republicans should fight. They have nothing less than federal law and the U.S. Constitution on their side. The GOP should litigate this matter all the way to the Supreme Court before ever yielding to Democrats’ rabid vision of how Americans should vote.

Election Day is the Tuesday after the first Monday in November, not thanks to “The Star-Spangled Banner” or something that Thomas Jefferson quipped as he sipped Madeira.

According to 2 U.S. Code § 7, “the Tuesday next after the 1st Monday in November, in every even numbered year” is the date for electing members of Congress and, quadrenially, per 3 U.S. Code § 1, presidential delegates to the Electoral College. These laws specify November—not October, much less September.

Neither statute allows for voting on Halloween or just after Americans leave the sand dunes on Labor Day.

Problem: These widely varied intervals deny voters equal protection under the 14th Amendment to the U.S. Constitution. A Pennsylvania ballot for U.S. Senate can sit around for 53 days, all the while vulnerable to willful sabotage, unwitting misplacement, or destruction due to floods, fires, or other mishaps. A Connecticut ballot for Senate faces those risks for one day.

If Americans all voted on Election Day, as we overwhelmingly did from the days of Andrew Johnson through Lyndon Johnson until about when Barack Obama arrived, voters and their ballots would enjoy something much closer to equal protection than today’s confounding collection of conflicting voting windows.

These objections aside, mass mail-in ballots, early voting, and all that are odious on their merits.

Democrats should be ashamed of themselves. By seducing millions of Americans into voting at home rather than at precincts, Democrats have destroyed the sanctity of the secret ballot.

Standing alone behind a curtain and picking one’s pols at the polls is totally different from voting at the kitchen table or at an office “vote party” as family, friends, co-workers, or even employers hover judgmentally. Likewise, filling a mail-in ballot beneath the gaze of a visiting party-hack trafficker demolishes secrecy.

Early voting resembles a jury deliberating before hearing all the evidence. In Pennsylvania, 635,428 voters mailed in their ballots before Democrat John Fetterman’s disastrous debate against Republican Mehmet Oz. Some voted as early as 39 days before Fetterman struggled to speak—a key senatorial skill.

Those who wished to change their early ballots were out of luck.

Rather than surrender to Marc Elias and the Democrats’ other “lawfare” soldiers who cooked this dog’s breakfast, Republicans need to lawyer up and litigate with all the passion that Thurgood Marshall brought to Brown vs. Board of Education and other lawyers devoted to Miranda, Roe, Kelo, Dobbs, and other landmark cases.

Ultimately, the U.S. Supreme Court should ponder a simple question: What part of “the Tuesday next after the 1st Monday in November” is unclear? Atop the two relevant federal statutes, the 14th Amendment argument deserves their scrutiny.

If such litigation prevails, the Democrats’ infernal, increasingly permanent, “temporary” measures will go the way of masks, social distancing, and Dr. Anthony Fauci.

And if such litigation fails, then—and only then—should Republicans discuss beating Democrats at the filthy, illegal electoral scams that they have sicced on America’s voters.