A Promising Proposal to Stop Wrongful Seizure of Assets 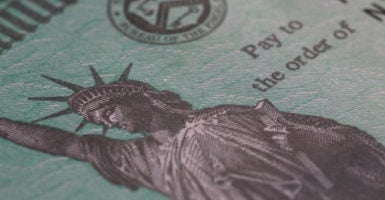 The RESPECT Act would prevent the IRS from seizing assets unless they are “derived from an illegal source” or otherwise structured to conceal a crime. (Photo: Douglas Sacha/Getty Images)

One day in 2012, the IRS turned Randy Sowers’ life upside down when agents seized his entire bank account—$63,000 in hard-earned money.

Now, Congress is advancing legislation that would end the practice that made that travesty possible.

Sowers was not, after all, a tax evader, criminal conspirator, or money launderer. He is a hard-working Maryland dairy farmer. But the IRS decided to take his money anyway, citing “structuring” laws designed to stop criminals from evading financial reporting requirements. Merely to end the matter, Sowers eventually agreed to forfeit $29,500 to the IRS in a settlement that bordered on extortion.

These so-called legal source structuring cases are permitted because federal law requires banks to report financial transactions that exceed $10,000 in value, and separately makes it a crime to “structure” deposits or withdrawals to avoid that threshold and the reporting requirements it triggers.

If the agency believes that an individual has structured payments—even if the funds themselves are not illegally earned—it can seize and seek forfeiture of his entire bank account.

According to the Institute for Justice, the agency used that power to pursue legal-source structuring cases with alarming frequency. Between 2005 and 2012, the IRS seized some $242 million in more than 2,500 cases. Fully one-third of these civil cases involved only allegations of structuring—no other wrongdoing was alleged.

That initial report was backed up in 2017 by a Treasury Inspector General for Tax Administration audit of a sampling of IRS structuring cases. The inspector general found no evidence of underlying crimes in 91% of the sample structuring cases it reviewed, and noted that IRS investigators often ignored business owners’ reasonable explanations for their withdrawals and deposits.

Insurance liability, for one.

Take the case of Terry Dehko, who owned a Michigan grocery store and was only insured against cash losses up to $10,000. He unsurprisingly made frequent cash deposits valued at near the reporting threshold. The feds nevertheless nabbed $35,651 from Dehko.

Sowers, too, had a perfectly reasonable explanation: His bank had advised him to keep his deposits below $10,000 so the bank could avoid having to deal with the reporting paperwork.

The inspector general attributed part of the blame for this “seize first, question later” approach to a “quick hit” strategy favored by some U.S. attorney offices. The goal was to rapidly seize assets, often based solely on patterns of deposits or withdrawals, and “reach[] a negotiated resolution”—in other words, seize whole bank accounts regardless of evidence of criminal intent, offer a portion back to the owner, and keep the remainder.

These quick hits, according to the inspector general, “characterize[d] most of the cases in [the] audit.”

That certainly describes what happened to both Dehko and Sowers. The IRS refused to settle with Dehko unless he agreed to forfeit 80% of his money. Thankfully, with legal representation from the Institute for Justice, a public-interest law firm, Dehko fought the seizure and got it all back.

The feds demanded even more from Sowers. After he went to the media, the prosecutor handling his case demanded not only Sowers’ money, but also that Sowers and his wife admit that the government had cause to seize that money in the first place.

For the IRS, that turned out to be a Pyrrhic victory. The agency’s treatment of Sowers prompted such a backlash in the public and in the media that the agency eventually returned his money.

And it earned such ire on Capitol Hill that lawmakers named the bill intended to end this detestable practice the Clyde-Hirsch-Sowers RESPECT Act, in honor of him and two other victims. Jeffrey Hirsch spent three years fighting to get back $446,000 seized from his family business, and Andrew Clyde, a veteran and gun shop owner, was forced to forfeit $50,000 after spending twice that much in legal fees to contest a $950,000 seizure.

Last week, the House of Representatives once again unanimously passed that bill. Neither the public nor lawmakers, it seems, are keen on the IRS seizing people’s money merely because it can.

The Clyde-Hirsch-Sowers RESPECT Act, sponsored by Reps. Doug Collins, R-Ga., and John Lewis, D-Ga., would permanently bar seizures of funds for structuring offenses unless they are “derived from an illegal source” or otherwise structured to conceal a crime. The IRS adopted this rule under public pressure in 2014. The bill would codify it, ensuring it cannot be undone by the agency in the future.

The bill also would give property owners the right to a post-seizure hearing within 30 days, at which prosecutors must demonstrate probable cause that the funds are illegal or that the structuring offense concealed a crime. If that burden cannot be met, the owner would be entitled to a return of the seized funds.

The RESPECT Act passed the House unanimously in the last Congress, only to stall in the Senate. But its reforms are so commonsense and broadly supported, it ought to be a no-brainer for lawmakers to advance. If they do, Congress would ensure that individuals and small business owners facing unjust IRS seizures have the permanent legal protections they deserve.

That would be the first significant federal civil forfeiture reform in years—and hopefully not the last.