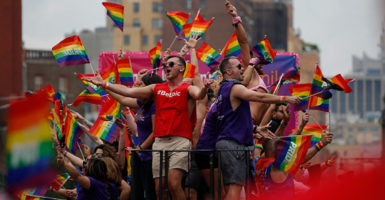 The Kentucky Supreme Court ruled unanimously Thursday that a printer cannot be forced to print T-shirts that violate his faith.

In a case that dragged on for seven years, Blaine Adamson, owner of Hands On Originals, a promotional printer in Lexington, declined to print T-shirts for the Lexington Pride Festival, hosted by the Gay and Lesbian Services Organization.

“Today’s decision makes clear that this case never should have happened,” said Alliance Defending Freedom senior counsel Jim Campbell, who argued the case, in a statement. “For more than seven years, government officials used this case to turn Blaine’s life upside down, even though we told them from the beginning that the lawsuit didn’t comply with the city’s own legal requirements. The First Amendment protects Blaine’s right to continue serving all people while declining to print messages that violate his faith.”

A concurring opinion from Justice David Buckingham cited recent U.S. Supreme Court precedent prohibiting compelled speech, writing, “Hands On was in good faith objecting to the message it was being asked to disseminate. … Forcing free and independent individuals to endorse ideas they find objectionable is always demeaning.”

In 2012, Adamson referred the group to another printer that would do it for the same price, but the group brought a complaint to the Lexington-Fayette County Human Rights Commission.

“I have gay customers and employ gay people,” Adamson said in a video op-ed for The Daily Signal in 2017. “For example, we have printed materials for a local band called Mother Jane whose lead singer is a lesbian. That was never a problem for us because, as I said, we’ll work with everyone, but we can’t print all messages.”

Adamson also talked about other T-shirts he wouldn’t print, including one that would have read “Homosexuality is a sin.”

In 2014, the Lexington-Fayette commission ruled Adamson must print the messages. All state-level courts ruled in Adamson’s favor.

As the case wound through the courts, Adamson received support from lesbians who own a print shop in New Jersey and agreed with his right not to print messages he finds objectionable. He received 13 “friend of the court” briefs from across the country, including from Kentucky Gov. Matt Bevin, a Republican, and officials from 10 states.