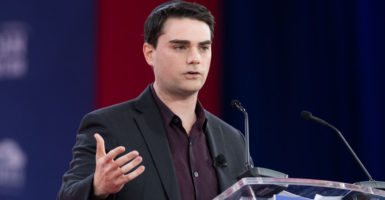 A California venture capitalist has gathered enough signatures to put before voters this fall the idea of breaking his state into three.

Skeptics say the proposal will fare no better than previous efforts to do the same, yet the state is already politically fractured—and nowhere are the fissures more evident than on the state’s college campuses.

The Young America’s Foundation and the Berkeley College Republicans have found a yawning gap between what school administrators say about free speech on campus and their actions. University of California, Berkeley administrators say they “[do] not discriminate against speakers invited by student organizations based upon viewpoint.” Students say recent events demonstrate otherwise, and they’re taking Berkeley to court.

Last week, a federal judge denied Berkeley’s request that the court dismiss a lawsuit alleging that the school discriminates against conservative speech on campus. The ruling allows Young America’s Foundation and the Berkeley College Republicans to proceed with their complaints that the university has an unwritten policy regarding high-profile speakers that limits conservative campus events.

In an interview, Bradley Devlin, president of the Berkeley College Republicans, said, “Without that legal accountability, nothing is going to change. That’s why we entered this lawsuit in the first place. It’s for student organizations, regardless if they are liberal or conservative.”

Last week’s ruling is the latest development in Berkeley’s free speech saga, which dates back more than 50 years. The Washington Post says Berkeley “gave birth to the free speech movement” in 1964 after police arrested nearly 1,000 protesters staging a sit-in. More recently, the riots surrounding Milo Yiannopoulos’ attempt to speak at the school early last year followed by the on-again-off-again plans for Ann Coulter to speak have kept Berkeley in the center of the battle over free speech on campus.

Some in the state Legislature have tried to help: California Assemblywoman Melissa Melendez introduced a proposal to protect free speech on campus that is similar to legislation Arizona and North Carolina lawmakers have adopted in the last year. The Wisconsin Board of Regents has also approved operating policies similar to this legislation.

Melendez’s proposal was voted down in committee.

Her proposal would have required the state university governing board to appoint a committee that would report on the way schools handled free speech incidents on campus each year. It would also have required public colleges and universities to institute a “range of disciplinary sanctions, which may include suspensions, firings, and expulsions, as applicable, for anyone under the jurisdiction of the institution who materially and substantially interferes with the free expression of others.”

Policymakers in Louisiana, Texas, and Nebraska, to name a few, have considered similar ideas in recent years. Georgia lawmakers sent a proposal containing some of these provisions to Gov. Nathan Deal on April 5.

Berkeley leadership may be unhappy with the recent court decision, but it should be relieved that conservative groups took their complaints to court rather than attack the quad with Molotov cocktails, as those protesting Yiannopoulos did last February.

According to The College Fix, protesters have shouted down speakers on college campuses 11 times since September 2017.

California voters will have to decide whether the state splits into three parts. But as long as the state remains whole, lawmakers and university leaders should rally students behind the cause of  free speech on campus for both sides of controversial debates.

Devlin says, “It’s our responsibility to expose people to new ideas and strengthen our own ideas. If we didn’t do it, the university wouldn’t do so.”