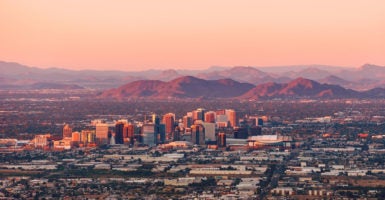 Colleges will also have less authority to restrict speech on campus. The law recognizes that administrators can regulate speech on the public parts of campus, but it limits that authority.

While the First Amendment has long limited regulations to the “time, place, and manner” of speech in public forums, now schools can only exercise that authority to restrict speech if it is “necessary to achieve a compelling governmental interest” and is “the least restrictive means” for doing so.

These provisions make it more difficult for colleges to censor free expression on the quad and other public spaces on campus.

The law allows for the “spontaneous distribution of literature,” and says any person who is lawfully present on campus may protest or demonstrate there. However, “individual conduct that materially and substantially infringes on the rights of other persons … is not allowed and is subject to sanction.”

The new law also says that schools may suspend or expel students who have repeatedly interfered with others’ ability to express themselves. Critically, these provisions also include due process rights for students accused of blocking free speech so that students are notified of campus hearings on their charges and can find representation.

Such provisions have helped prevent violent activity on campuses in other states. In Wisconsin, where the state board of regents adopted similar provisions last year, student protesters marched to protest a campus event in October but told the media they decided not to disrupt the lecture because they could face consequences under the new policies.

Many of the ideas in these new laws stem from the turbulent experiences of schools in the 1960s and ‘70s, according to Goldwater Institute research.

A Yale commission issued a report in 1974 that recommended sanctioning students for shouting down speakers or disrupting events. The University of Chicago issued a document in 1967 saying the school should not take action against members of the campus community for expressing controversial opinions on hot topics of the day.

In 2017, Stanley Kurtz wrote for National Review that the “spring of 2017 will long be known for popularizing” the speaker shout down. But events on campuses later that fall were equally disappointing.

Problems persist this year. As classes finish for the semester, two more shout downs have occurred just in recent weeks. Duke students were so brash as to use a bullhorn to force the school president off a stage where he was delivering remarks to college alumni.

In both of these recent incidents, college administrators refused to take any action against the students.

Recent surveys found that 96 percent of presidents said it is important for colleges to “allow students to be exposed to all types of speech even if they may find it offensive,” but this survey also found some approval for shout downs. Fifteen percent of presidents in the survey said it is sometimes appropriate for students to shout down a speaker.

In a separate survey also released in 2018, 10 percent of students said it is appropriate to use violence to stop a speaker sometimes, while 37 percent said speaker shout downs are sometimes acceptable.

The new policies in Arizona, North Carolina, and Wisconsin should counteract these disruptive, violent actions on public college campuses and make it harder for school administrators to make excuses for this behavior. Students and adults on campus need lawmakers and administrators to protect free speech—and not fear what may (or may not) happen if protests get out of hand.