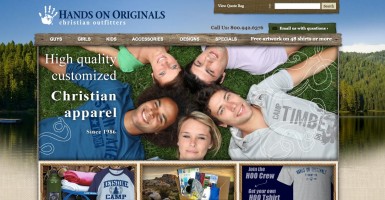 A Kentucky court ruled on Monday that a Lexington printing business does not have to print messages that are in conflict with its religious beliefs.

The decision runs contrary to recent high profile rulings, including ones against Oregon bakers and a Washington florist who were punished for refusing to serve same-sex weddings.

The Kentucky ruling signals that states and local governments are still divided on the question about whether public places have the right to refuse service based on religious objections.

“What this court found in this case is that no one should be forced to promote ideas—or in this case, print ideas—that conflict with their beliefs,” said Jim Campbell, an attorney for Alliance Defending Freedom representing the printing business. “That protection is for everyone. It’s a protection that’s for the atheist just as much as it’s for the person of faith.”

The printing company, Hands On Originals, is a small business located in Fayette County, Ky.

The company prints custom messages on items such as shirts, hats, bags, cups, and mugs.

The issue began on March 18, 2012, when Aaron Baker, representing the Gay and Lesbian Services Organization, alleged that Hands On Originals denied that group “full and equal enjoyment of a service” by refusing to print official t-shirts for the organization’s 2012 Pride Festival.

The Gay and Lesbian Services Organization advocates for the lesbian, gay, bisexual, transgender, and queer community.

>>> After Receiving Over $100K in Donations, Bakers’ Crowdfunding Page Shut Down

The Lexington-Fayette County government has a non-discrimination ordinance, which generally prohibits a public place from discriminating against individuals based on their sexual orientation or gender identity.

The state of Kentucky has not adopted the policy.

The county’s Human Rights Commission originally ruled that Blaine Adamson of Hands On Originals discriminated against the LGBT group.

But after appealing to the state, Adamson, co-owner of Hands On Originals won the case, when a Fayette County Circuit judge ruled he has a “constitutional right of freedom of expression from government coercion.”

“With all due respect to the Hearing Commissioner and the Human Rights Commission [the plaintiffs arguments] are not factually accurate and are in direct contrast to well established precedent from the United States Supreme Court interpreting the Federal Constitution,” wrote Judge James Ishmael.

The Hearing Commissioner agrees that these cases support a finding that when [Hands On Originals] prints a promotional item, it acts as a speaker, and that this act of speaking is constitutionally protected.

Campbell, the lawyer representing the printing business, says the case signifies that the issue of religious expression in the workplace will continue to be debated in the courts.

And in this case, he said, the judge’s ruling “affirms the right of Americans to live out their faith in the workplace.”